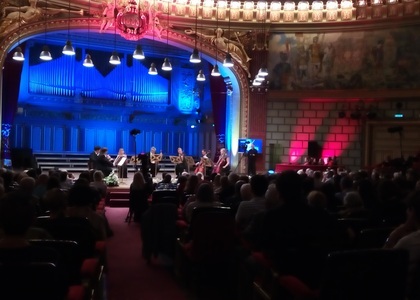 The Third Day of the 'George Enescu' International Festival

Tuesday, 5 September 2017 , ora 9.35
The London Philharmonic Players ensemble performed at the Romanian Athenaeum, while the Russian National Orchestra presented its first concert at this edition of the Festival, on the stage of the Palace Hall.

The "George Enescu" International Festival continued on Monday, 4th September, 2017, with two other events: the London Philharmonic Players ensemble performed at the Romanian Athenaeum while the Russian National Orchestra presented its first concert at this edition of the Festival, on the stage of the Palace Hall.

That is how the third day of the "George Enescu" International Festival began. The thunderous applause were for the London Philharmonic Players, an ensemble that proposed a programme by Felix Mendelssohn, namely, the Octet in E flat major, Op 20, at the Romanian Athenaeum yesterday evening.

"It was absolutely superb. Their interpretation was fantastic, and the hall is amazing. For me, it is the best place for a concert. "

...including the Octet in C Major Op.7 for Strings by George Enescu.

"I especially enjoyed Enescu's work. I had never listened to it. It has a special amount of energy and reality. I liked it a lot. It has been a great experience so far and I look forward to all the concerts in the festival. "

"I find it extraordinary and I find it a joy to see them in Bucharest, to have the opportunity to see them here one evening ... You can not even believe that this festival is happening and it is still possible for us to have such a festival in Romania. I think this is fantastic luck. "- Actor Marius Manole

Enescu's music was also performed at the Palace Hall, on the opening evening of the "Big Orchestras of the World" concert series. Conducted by Mihail Pletniov, the Russian National Orchestra performed the Isis poem signed by the Romanian composer, an Enescian work accompanied by the Academic Radio Choir.

There followed an impressive moment with Nikolai Lugansky as soloist of Concerto no. 3, for Piano and Orchestra, in C Major, by Sergey Prokofiev.

"I was glad to listen to him. He's a pianist of great strength, one of the greatest at the moment. His interpretation of the Prokofiev Concert was complete. It had lyricism and glamour and sarcasm and gentleness in it, and the granite technique that we highly admire about the Russian piano school, so well founded for decades, a school that has fascinated the musical world for so long. It was a joy to listen to him in communion with the orchestra that accompanied him, with the insight and understanding of this masterpiece and, of course, with a conductor who, in turn, was and is a pianist of great strength, a wonderful musician." - pianist Viniciu Moroianu.

The 6th Symphony of the same Sergei Prokofiev completes a new successful day at the "George Enescu" International Festival, as violist Theodor Andreescu says: "I felt great listening to this interpretation of the Russian soul by a Russian orchestra and a Russian conductor. The piano concert was extraordinary and I felt it kept the audience open-mouthed. It's an extraordinary difficult concert, but this was not obvious. And before this concert, I was able to witness Enescu's Octet, played by the London Philharmonic Players - who were, in fact, the first orchestras on stage - and I was surprised at how well they could understand Enescu. It is extraordinary that the members of an English orchestra managed to render Enescu's Romanian feeling, so well. "