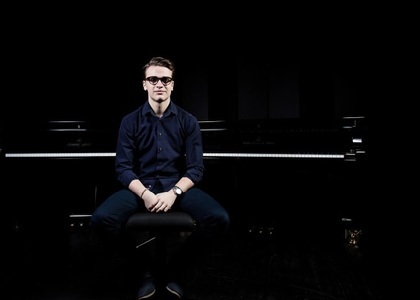 At merely 16 years old he was admitted to the Mozarteum University Salzburg in Austria, joing the class of professor Pavel Gililov. Now a sophomore, he is already playing alongside Hans Gansch, the renowned trumpet concertmaster of the Vienna Philarmonic Orchestra, the Concerto No. 1 for Piano, Trumpet and String Orchestra by Shostakovich, conducted by Wolfgang Redik at the Salzburg International Chamber Music Festival.

Andrei Gologan is laureate of the Kiev International Competition for Young Pianists in Memory of Vladimir Horowitz and the Lions European Music Competition in Istanbul. The latter recognition offered him the chance to hold recitals in Vienna, Salzburg, Graz and Linz, but also at the Stift Ossiach cultural centre, where famous pianists such as Emil Gilels and Wilhelm Backhaus have held legendary concerts.

Pianist Andrei Gologan is a first-time guest at the Tuesday evening stagione.

Tickets are on sale at the Romanian Athenaeum's Box Office

Born in 1992 at Piatra Neamt, Andrei Gologan started studying piano at the age of 5 under the guidance of professor Ada Chicu. After having studied piano for less than half a year, preschool Andrei was already winning his first award - the first prize at the Carl Czerny National Piano Competition. Subsequently, he began an intense training meant for his artistic growth and improvement with pianist Iulian Arcadi Trofin, under whose guidance he took part in different concert tours in Romania, Italy, Scotland, Switzerland, Hungary and USA. Iulian Arcadi Trofin becomes the young pianist's mentor, contributing decisively to his artistic refinement.

At the age of 13, Andrei Gologan debuted with the Bacau Philarmonic Orchestra, conducted by Master Ovidiu Balan.

In February 2017, Andrei Gologan started an artistic collaboration with pianist Sir Andras Schiff. At the latter's initiative, Andrei has been accepted at the academy of Verbier festival in Switzerland, where not only was he involved in musical activities, but also worked with powerful celebrities in the musical world, such as: Gabor Takács-Nagy, Ferenc Rados, Sergey Babayan, Pamela Frank, Sir Andras Schiff.

Part of his 2017 artistic fall calendar are a number of appearances, among which we mention the Beethoven Festival in Bonn or his presence in Munchen, where he has graced the stage at Herkulessaal. The pianist will also hold a couple of recitals with the occasion of the project Building Bridges 2018/2019, an activity existing under the artistic patronage of master Schiff. Andrei has been granted a scholarship at the International Music Academy in the Principality Liechtenstein, where he periodically attends intensive courses and takes part in artistic activities.