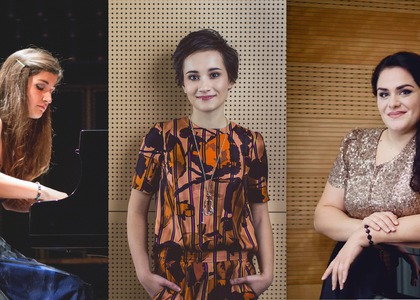 "This year marks the 50th anniversary of Kodaly Zoltan's departure, and on the 12th of December we have the 135th anniversary of his birth, so there have been several programs and musical projects at the Institute, dedicated to the memory of this composer, this ethnomusicologist of great quality and rather unknown, as you have noticed, at least in Romania." - said Bara Hajnal - music referent of the Hungarian Institute in Bucharest about the recital dedicated to the composer Zoltán Kodaly at the Romanian Atheneum; a recital recorded during the Tuesday evening programs by three students of the "Franz Liszt" Academy of Music in Budapest:

"We have a four-year collaboration with the Franz Liszt Academy of Music in Budapest, where there is a special direction that supports the evolution of young performers and their promotion. "

Cellist Karasszon Eszter, pianist Hotzi Panni and mezzo-soprano Kiss Judit Anna brought on the 7th of November a unique program played with virtuosity, a program studied with earnestness. In the singing of the three musicians the joy of making music was felt, the interest for the accuracy of the style approached - Zoltán Kodaly, the chosen works being rendered with energy and passion. I witnessed this recital which did not arouse much curiosity among the public, having a small audience, consisting mainly of specialists, among which surely there was Cristina Sârbu - the coordinator of the Tuesday evening programs:

"A wonderful Hungarian music evening dominated by Kodaly and Bartok. I had three guests from Hungary, three wonderful girls, in a small, chic room with a very unique atmosphere. A limited but warm audience enjoyed listening to music you cannot hear every day, which you cannot enjoy every day, but here, with that atmosphere and under those conditions we were glad to hear in an exceptional interpretation."