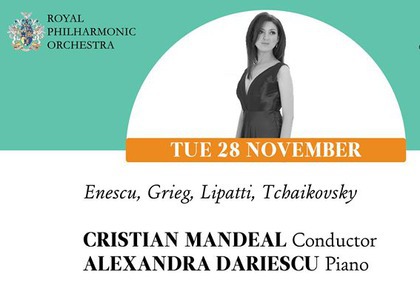 On Tuesday, November 28th 2017, the Romanian Cultural Institute in London and the Royal Philharmonic held a high class event, with a triple significance behind it - it marked the centennial of Dinu Lipatti birth, but it also celebrated the National Day in advance and it represented the beginning of the cultural manifestations dedicated to the Centenary of the Great Union.

Housed by Cadogan Hall, with a capacity of 900 seats and with extraordinary acoustics, the concert was accompanied by an opening speech given by mister Dorian Branea, the director of RCI, and, also, by His Excellency Dan Mihalache, the Romanian ambassador in the capital city of the United Kingdom. It represented a collaboration between two prestigious Romanian artists - conductor Cristian Mandeal and pianist Alexandra Dariescu - along with the Royal Philharmonic Orchestra from London, performing a program that put the works of Enescu and Lipatti in an European context, complemented by opuses composed by Grieg and Tchaikovsky.

British conductor Samuel Draper, who interpreted Enescu's 4th Symphony for the first time in the United Kingdom this year, shared with us a few words:

"I had the pleasure of seeing Cristian Mandeal conducting for the first time and I really enjoyed witnessing his style. From a technical point of view, his gestures were always flowing elegantly, depicting the musical ideas of the orchestra. I particularly enjoyed Tchaikovsky's Francesca da Rimini Overture and the way Mandeal conducted the tempo changes and that rubato that is crucial for this type of music and gives it an improvisatory feeling and quite a beautiful romantic emotional content."

"I was quite interested to see Cristian Mandea. I have not witnessed him conducting in Great Britain, only in Bucharest a few times, during the Enescu Festival. The most recent one was only a few months back, when he conducted Sibelius' 2nd Symphony. During tonight's program, I noticed that in the closing work, in Tchaikovski's Francesca da Rimini, Mandeal was in control of the tempos and conveyed a wide range of emotions, from melodramatic to comic. It was impressive. Tchaikovsky also managed to bring some contrast after the works of Dinu Lipatti, which were written in the early 20th century, with neoclassical influences, such as Stravinsky or Prokofiev. The death of Lipatti at such a young age was truly tragic because we will never know how he would have evolved from a compositional point of view. Enescu, for instance, has permanently composed, although he was also an interpreter. Lipatti was first of all a pianist and composing was also left on second place. The fact that light has been shed on his works in the year of his centennial is quite remarkable. The Concertino in a classical style is highly attractive and it is a work that all the orchestras worldwide should consider including in their repertoire. Alexandra Dariescu has interpreted Grieg very well. Perhaps the program would have used a Concerto such as the ones composed by Schubert, to add a bit more contrast to the whole performance. From this point of view, it was an informative interpretation. I think that, while performing Enescu's 1st Rhapsody, Mandeal tried to create certain reflections that would have made much more sense with a Romanian orchestra. The acoustics of the Cadogan Hall are quite special, but this trait might affect Enescu's works and even some excerpts of Tchaikovsky's works. The contrast was good and I am pleased that we were delighted by Lipatti's works in London, in the year of his centennial."

Apart from the exhibition put together by the George Enescu National Museum, which was displayed in the foyer, the Lipatti Centennial also prepared an exceptional premiere for all those who love the brilliant pianist and composer: the first and only public broadcast of the video in which Dinu Lipatti appeared. Talking about this video is musicologist and conductor Erich Singer, author of The Festivals of Lucerna, Toscanini and Abado, which appeared in 2014:

"When I wrote the book, Ursula Strebi, the daughter of Walter Strebi, one of the main characters from the early stages of the Festival, told me that she had found an 88 mm video that her father made at a party and that she was trying to digitize it. The party took place in the house of the Sterbi family, before the Lucerna Festival in August 1947, were Lipatti would perform his first concert. He joined the party, along with his wife, Madeleine, and he only appeared for a few seconds in this amateur made video."

These scenes were brought to light thanks to British journalist Orlando Murrin, one of the passionate researchers of the life and activity of Lipatti:

"I was indeed lucky because the videos had already been digitized by Ursula Strebi. The videos were very long and I considered that I would have to extract the images with the most important musicians that appear (many of which we will be seeing here tonight) and to create a montage around the images of Dinu Lipatti. And because the video was silent, I needed a soundtrack. The first part of the Concertino in classical style was a perfect match."

This video in which Dinu Lipatti appears will premier in Romania, in Bucharest, on the 4th of December, starting with 6:00 PM., at the Greorge Enescu National Museum, within a symposium - concert which will present the important findings about Dinu Lipatti in his Centennial year.