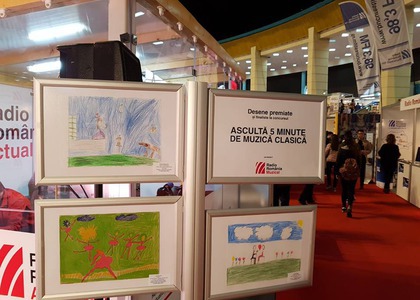 Exposition of Drawings at the Contest entitled 'Listen to 5 Minutes of Classical Music', at Gaudeamus Book Fair

Within the bounds of the 24th edition of the International Book Fair Gaudeamus, on Saturday, 25th of November 2017, there took place the exhibition with the final awarded drawings of the two editions that have been organized until now of the National Contest "Listen to 5 Minutes of Classical Music" - the section for the junior children, a contest organized by Radio România Muzical. At the event, there were present Adrian Silvan Ionescu, Cristina Comandaşu, founder and coordinator of the project entitled "Listen to 5 Minutes of Classical Music", the authors of the painters and their teachers, representants of the contest's sponsors.

"Thanks to this project, I began to create better drawings and felt even better, because I had a lot more faith in me. I use to listen to classical music while drawing. I love it, because it gives me inspiration and helps me create themes that I'm directly applying. Ioana Andreea Gugu, I have 11 years and I'm in the 5th grade."

"I've learned to paint even better and relax at the same time, thanks to this project. I began listening to much more classical music. Vlad, I have 10 years, Nr. 195 School."

They are only three of the awarded-students of the National Contest "Listen to 5 Minutes of Classical Music", the domain dedicated to the pupils of elementary school, speaking about the impact of the project organized by Radio România Muzical over their creations. The statements were made on Saturday, 25th of November 2017, at the exhibition's varnishing with the final and awarded drawings of the two editions of the competitions existing until today.

At the event that took place at Romexpo within Gaudeamus Book Fair there were present Cristina Comandaşu - initiator and coordinator of the Project "Listen to 5 Minutes of Classical Music": "This is a project that wants to bring classical music closer to children through its constant exposure in school, such is the case of schools and kindergarten. The project addressed at first to those who are in primary school, but I have received too many echoes that we somehow need to do something also for children in the primary school. They cannot answer the questions of the contest that kids find it online, week by week, but they can draw. This was our starting point in 2016, when we organized the first edition of this drawing contest."

Alice Ene, representing The Junior Humanitas Publishing House, one of the contest's sponsors: "I have answered affirmatively, first and foremost, because we believe we need, above all, a musical and visual education, but also a reading education. The more you read, the more you'll acquire a universal imagination that we'll help you in every domain. What I mostly desire is that these children should enjoy this contest also the next year, because, when I was their age, I did not enjoy these 5 minutes of music….I was telling you earlier that I have discovered classical music in the library. These little creators deserve lots of attention."

Also Adrian Silvan Ionescu, historian and art critic, and at the same time, one of the jury members of the National Contest "Listen to 5 Minutes of Classical Music": "The way in which each and every one of them decided to use the line, the color, the spot in order to exteriorize their emotional impulses sent by the musical piece reveal sensibility and imagination, an extraordinary imagination, even a overflowing one, I could say, in some of the cases, managing to portray a musical piece that they may have heard for the first time. Such a sensory education, this musical education truly has to go hand in hand with the drawing education. It's truly a good thing that you thought about initiating this contest starting from the primary levels of school, so that you could esthetically prove what did they understand from the established music, as visual and auditory sensibility develop themselves on the same time-frame. Perhaps some of these little artists that we have awarded, that we have also stimulated at the same time, we shall find ourselves in them the great painters of tomorrow that are going to represent us not only here, but also abroad."

The exhibition with the final awarded drawings of the two editions of the National Contest "Listen to 5 Minutes of Classical Music" will be opened to the public in the Radio's Hall lobby. For more details, go to our site: www.romania-muzical.ro.