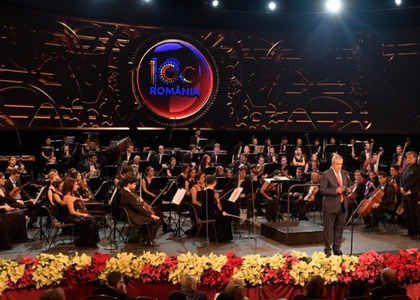 "In the coming months we shall have the opportunity to celebrate one hundred years since the most important event in modern Romanian history, the unification of all historic provinces with the motherland, symbolizing the evolution of the people and also a building block of our national identity. I believe that the celebration of this event should be first and foremost about the unity of all Romanians. After one hundred years we must show that we still are a powerful nation, which knows that only through unity can we achieve greater aspirations." - said Lucian Romașcanu, Minister of Culture and National Identity at the event-concert opening the cultural manifestations evoking the Great Union's centenary of 1918.

The concert occurred on National Theatre of Bucharest's stage on the 26th of November 2017 and was held by the Romanian Youth Orchestra, led by one of the most appreciated Romanian conductors of the moment, Cristian Măcelaru. The schedule began with the Romanian Rhapsody No. 2 in D Major, Op. 11 by George Enescu and contained many other well-known pieces by Bach, Puccini, Rogalski and Ciprian Porumbescu.

"Romania sends a very special message through this concert, meaning that everything our ancestors did still resonates within us today and still has value, so the young people who will be on stage must carry the message further. International artists, Romanians and foreigners altogether, celebrate these one hundred years of modern Romania", said Marin Cazacu, artistic director of the Romanian Youth Orchestra.

The musical evening dedicated to the opening of the Centenary was also attended by historian Adrian Silvan Ionescu: "There were plays of great strenght. The interpretation of this youth orchestra under the baton of conductor Măcelaru was extraordinary, who already is a master. It was indeed a brilliant start of the centennial year. I hope the rest of the year to be at the same level as this introductory performance."

Present at the concert was also the writer Matei Vișniec: "The concert has a meaning. It is not accidentally conceived for the audience, but for the beginning of an anniversary that will last for a certain length of time and which should, in some way, bring together all Romanians. This anniversary has the purpose of evaluating what we have done so far and to figure out what we could do from now on. It is a celebration for each and every one of us. Regardless of one's political alignment or of one's own sensibilities, this is a moment of unity and it should be embraced with a little more enthusiasm."