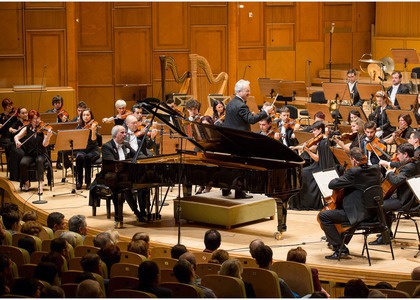 On Friday, December 1st, 2017, we celebrated the Romanian National Day by organizing a double event in the comfort of our Radio Hall. For the first half of the event, the music lovers, who turned up in large numbers, were able to enjoy the sounds of the famous Romanian Rhapsody no.1 by George Enescu, which was followed by Robert Schumann's work Piano concerto in A minor. The protagonist of the event was the piano player Viniciu Moroianu, who took the floor during the break of the publishing event as well, that took place in the foyer of the Radio Hall:

"Ștefan Costache and Monica Isăcescu, together with Mr. Comandașu deserve all our admiration and praises for this extremely valuable initiative brought forward by the Radio Hall Publishing House and I hope this is only the beginning. The CD includes Fantasy Op. 8 as well, the most ambitious composition of Dinu Lipatti, a sublime work that Dinu Lipatti had the courage to present to the association of Romanian composers. His intentions were to turn it into a symphony, but, unfortunately, he did not have the time to tend to this piece of work, which fell into oblivion until 1992 when I managed to bring it back to a concert hall thanks to the efforts of the late musicologist Viorel Cosma who handed me the score of this fantasy."

Dinu Lipatti's Fantasy Op. 8 was covered by Vinicio Moroianu on the latest CD signed by the Radio Hall Publishing House. The chain of events whose purpose was to bring tribute to the great musician for his 100th anniversary in March was followed by the release of the album "Dinu Lipatti - the composer". Our colleagues Monica Isăcescu and Ștefan Costache discussed this discographic project together with Viniciu Moroianu.

"The CD was tailored as a homage for the 100th anniversary of Dinu Lipatti, alongside Radio Hall Publishing House which brought this initiative to life, an initiative that has a special and unique touch to it as it manages to correctly convey the diversity of Dinu Lipatti - the composer - through a large and precise perspective. This piece of work evens out Luiza Borac's achievement from 2012, marked by an excellent double CD dedicated to the work of Dinu Lipatti for piano solo. I think this CD represents a premiere as it includes Dinu Lipatti's symphonic suite Les Tziganes, a creation that received an Enescu award in 1934 when he was 17 years old, which was followed by the work staples of the pianist - Concertino in Classical Style, Piano Sonatina for the left hand and Fantasy Op.8."

The second half of the evening was echoed with Beethoven's Symphony no.7 performed by the Radio National Orchestra and the conductor Vlad Conta. At the end of the event, the pianist Viniciu Moroianu joined the attendees in the foyer to sign autographs on the cover of "Dinu Lipatti - the composer".

It is important to mention that these remarkable initiatives meant to commemorate Dinu Lipatti's 100th anniversary do not stop here, but they continue today with a symposium concert dedicated to the discoveries made in 2017 regarding the activity and the life of Dinu Lipatti. One of the surprises planed for the evening is the projection of the first movie ever discovered in which Dinu Lipatti makes an appearance, a Romanian premiere that everyone is looking forward to. We are planning even more surprises which you can discover by being a part of the event this evening, on December 4th, 6:00 p.m., at the "George Enescu" National Museum.