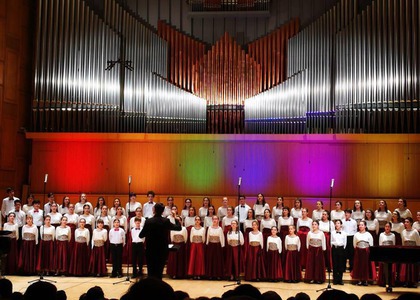 "A wonderful, heartwarming concert thanks to the repertoire, but also to the children's voices, which will always make us happy. They are our hope for tomorrow. It was a beautiful night and we go home changed for the better, more optimistic and cheerful", said conductor Dan Goia at the end of the concert performed on December the 9th by the Radio Children Choir and conductor Voicu Popescu.

"Noi umblăm să colindăm" (We Go Carol Singing) was the name of the magical journey that took us to every corner of the world. A journey as beautiful as it was interesting that made me, at least, imagine the picturesque village world with long-standing customs, with lanes that echo with the most beloved carols: "Cetiniţă cetinioară" (Fir tree branches, o, little fir tree branches), "După datini colindăm" (We sing as goes the custom) or "Domnuleţ şi Domn din cer" (Little Lord and Lord from Heaven), a part that the Radio Children Choir and conductor Voicu Popescu dedicated to the memory of King Mihai I of Romania.

The journey of the Radio Children Choir took us to the Balkans, Bulgaria and Greece and we traveled through Germany, France, Spain and also Ukraine to arrive in Latin America and the United States of America. The Children Choir was accompanied on the piano by Magdalena Faur and the special guests were Alexandru Anastasiu - who performed the percussion parts of the concert - and Răzvan Rădos - a young conductor impressed by the professionalism of the little artists:

Nearing the end of the journey proposed by the children, we came back to our own country, to the traditional carols that young and old alike are waiting to hear for Christmas. As usual, the public was very enthusiastic about the concert, seen as an explosion of youth and purity coming from the Radio Children Choir and their conductor, Voicu Popescu.

"Every December, we perform a carol concert some way or another. This time, we were fully committed. Since we have many new young joiners in the ensemble, I was thinking to perform an entire concert and I am glad that we carried it out. It is quite difficult to prepare a concert from scratch in just two months. The children managed marvelously through the period of intensive rehearsals. The concert was a success. I am glad that our children took part in it for the first time and the end of the concert, with such an enthusiastic audience, is the greatest achievement and reward for our work."