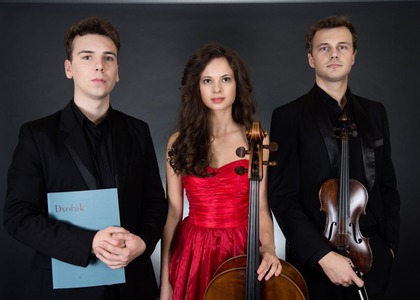 Tuesday night season at The Romanian Athenaeum – January the 30th 2018

Text of the article: Ella Bokor, Rafael Butaru and Iulian Ochescu are the members of the Ludens Piano Trio. On January 30th they performed in front of a large audience inside the Small Hall of the Romanian Athenaeum, giving a very clean performance, full of sound and emotions during Tuesdays' soiree.

The band was formed purely out of the group's desire to perform and offer a very diverse and novel repertoire to their pubic. Recognition soon followed; the Ludens Piano Trio came in in second place in the October 2015 International Contest of Chamber Music from Plovdiv. In the spring of 2017, the three musicians held their first national tour. The violinist Rafael Butaru spoke about their first musical meetings and about the significance of the name "Ludens".

"Ella was the one with the initiative. After a rehearsal, we scheduled a concert where we actually performed a piece by Gaspar Cassado and Rachmaninoff's Elegie. Regarding the name… we once had an unsuccessful attempt to be called ResonanTrio. It was a wordplay, a capital T, which, well, it didn't work out. We played at the SoNoRe Festival, and the only thing that we actually gained from the experience, thanks to Diana Ketler and Razvan Popovici, was the new name for the band. So we changed it. Seeing as we are a little bit theatrical, a little bit childish and we're always up for a laugh, we decided to be called Ludens, which means "play"."

I sensed your talent, your energy and the originality of the programs last night, as we listened to the two trios by Beethoven, Gaspar Cassado and the Brahms piano preamble performed by piano player Iulian Ochescu. The violinist Rafael Butaru, the violoncellist Ella Bokor and pianist Iulian Ochescu form an already likeminded trio, they communicate well with each other on stage, and that is why they not only seek technical perfection, but also to bring out special features within the music of each composer.

"It is a great pleasure and honor for me to perform with them."

How do you find Ella?

"Brilliant! She is a very special person and a fantastic cellist and maybe she is the glue that holds us all together and the reason we stay close and unique as a chamber ensemble. Rafael is an extraordinary person and, first and foremost, a brilliant violinist, a great group member and I think he deserves to be congratulated for everything he does, for his entire career and for everything he will do from now on."

"Iulian is one of the best pianists I have ever performed with. He is a great musician. As for Ella… I first fell for the sound of her music. She has a very distinctive style as a cellist, her very own signature sound."

Trio had a great, colorful and emotional performance, just as expected.