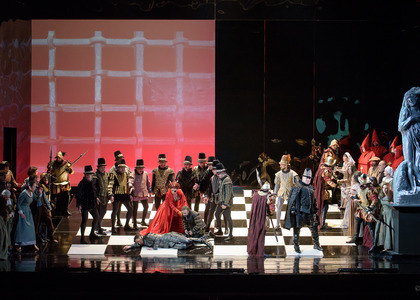 "Don Carlo" by Giuseppe Verdi is the new performance on the stage of the Bucharest National Opera. For this title the Italian director Mario de Carlo was invited, signing the whole concept of the show: director, scenery, costumes and lights. After a series of more or less modern versions, on February 18th we witnessed a classical event, for an audience who loves the traditional classic-style, a minimalist and very static. That's how Mario de Carlo's show looked like, a well-known name in the lyrical landscape and a connoisseur, we could say, to the public in Romania, and he also had other performances on the stages throughout the country. But here is the opinion of those who were in the audience:

Soprano Maria Slatinaru Nistor: "To me it seems a bit puerile and a bit... I don't know... I do not like that the performers are walking, they always run on the stage exactly when they have to sing. The partners... I see them close to each other. In the duet of the baritone and the tenor, when they swear faith to each other, friendship, they sing 10 meters apart from each other. And we had it more serious in Bucharest then, directed by Grop
șanu, it was a lot of black, gray, white. All the ladies who were colorfully dressed may have been fashionable in France, fashion brought by Elisabetta from France. "

The musicologist Grigore Constantinescu: "In my opinion, the show is a bit heavy. It is pleading at any price for all the characters who are engaged in this action and to the end the results of the dramaturgy are somewhat complicated, it is not solved, in fact we will see at the end of the opera that suddenly all things remain somewhere in a shadow and without an important human solution. "

Undoubtedly, not only the Verdi title in a new version attracted audiences to the event, but also the presence of some well-known names on the poster. And I refer to soprano Celia Costea - the singer Elisabeta de Valois, tenor Daniel Magdal - Don Carlo, Georgian bass Ramaz Chikviladze - King Flilip. The cast was completed by performers of the house such as: Oana Andra - Princess Eboli, Cătălin Ţoropoc - Rodrigo De Posa, Marius Boloş - The Great Inquisitor. A fairly balanced distribution where some have honestly paid off for their vocal performance, others have achieved remarkable performances labeled to the right value by those in the audience:

"Celia Costea is a true verdant with a generous and extremely beautiful center of the voice, with exact acutes and with those remarkable piano soft sounds. I was delighted to see what a great and impressive role Marius Boloş did as the Great Inquisitor. A deep bass voice of great value. He was extremely convincing, and it impressed me more than any role he has ever done. " (soprano Alina Bottez)

I am in perfect agreement with my co-speakers, stressing that the orchestra last night seemed less inspired to me, led by the conductor Tiberiu Soare. It did not find the optimal dosage, adapted to the vocals on stage:

"A little loud, massive orchestra, of course, it's a premiere! Let's understand the emotions and hear what the show is about." (soprano Maria Slatinaru Nistor)

"The sound size of the orchestra and even the choir, but especially of the orchestra, where the conductor engages in a sound temperament and, let's say, a Spanish romantic that goes beyond the composer's suggestions or claims." (musicologist Grigore Constantinescu)

How was this first show received by the public? With lots of applause, so we could say it will be a success. However, time will decide how long the "destiny" of Don Carlo's work will last on the stage of the Bucharest National Opera, in this directorial vision.

Here is the distribution of the first show: