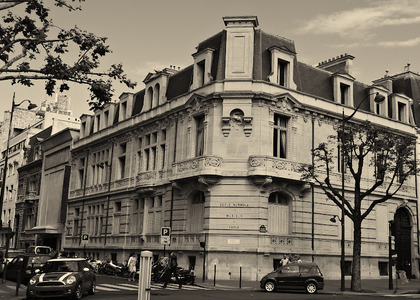 Starting from Monday, February 21st 2018, The École Normale de Musique de Paris "Alfred Cortot" organized master classes for young musicians between 16 and 25 years of age at the "George Enescu" National Music High School in Bucharest. The final concert took place yesterday evening in the "Ion Voicu" Hall of the high school. The audience listened to the 18 students as well as their two professors, who opened the evening with Part 1 of the Sonata no. III "dans le caractère populaire roumain" (in Romanian Folk Style) by George Enescu. Before the concert, I had the pleasure of talking to Romanian violinist Florin Szigeti, currently a professor at the École Normale de Musique de Paris "Alfred Cortot":

"I have a spiritual satisfaction. I grew up here, I studied here and after 40 years I still find a hats-off level! And I'd like to congratulate the violin professors. As to the Western star system, we've found some elements, really good instrument players, well prepared, the fundamentals are there, so they can build upon that and take part in competitions and develop musically and personally."

and with David Lively, pianist and also head of the competition department at the École Normale:

"The connection between the École Normale de Musique de Paris and Romania is a historical one. What we wanted to do was to actually maintain and strengthen the relationship. On a more personal note, when I was very young, I had the opportunity of meeting the family of Lipatti's doctor in Geneva - the doctor himself I didn't meet, he had already died - and, through the family, I was able to spend some time with Madeleine Lipatti. In doing so, I managed to get closer to the mythical figure that Dinu Lipatti was. His recordings bear an extremely beautiful and unique message of artistic purity and rigor which means a lot to me, and he is also an example of what I think represents the Romanian pianistic touch.

The students are extremely talented and so it will be very difficult for me to decide who will be the happy winner of the grant in Paris. I know the level, of course, so I know where they would fit in the school timetable, but I'm not talking just about piano skills here, but also about the personality, the level of development and the maturity that the student requires in order to fully benefit from the experience in a foreign country and the cultural richness that Paris can offer."

Let's listen to some of the participants themselves:

"I've learned so much during this master class. I've grown from a musical standpoint and I learned how to carry myself on stage. It was truly beneficial for me."

"I thought the master class was very interesting and very practical. We worked a lot on technique and on improving it, on long phrases and on the entire conception of the piece, not just on fragments."

Based on the information collected over the three days of courses, the École Normale, represented by the two professors, will award two grants in Paris, one for each instrument (violin and piano), for the academic year 2018-2019 and 2019-2020. The winners will be announced in March.

Alina Pavalache, the coordinator of the project from the Noesis-Enesco association that organized the classes, concluded:

"There were 18 students in total, 10 for the piano, 8 for the violin. I think the results are excellent. The two maestros were very pleased with the level of the young Romanian musicians. I will give the files over to the secretariat and pedagogical department of the École Normale de Musique."