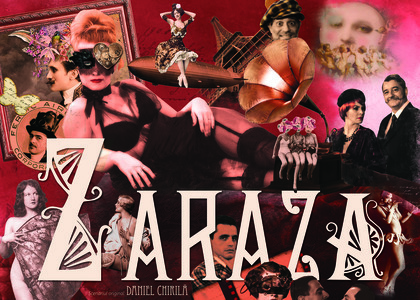 I do not know how he did but ... he did! A spectacular career, an original and brilliant journey, a discreet ascension though it has always happened in the spotlight ... a tenacity not forthcoming to anyone and a stubborn ambition of more, more beautiful, more diverse ... Răzvan Mazilu is today a dancer , director, choreographer, costume designer ... a complex and original artist, a brand synonymous with quality. A true creator of spectacles with a unique status in the landscape of Romanian scenes life. As all the time, he, Razvan, loved and spoiled as a terrible enfant even at his 40 years, surprises, astonishes and delights with every new title he offers. Of course not alone. Besides his side stay only the friends who follow him with all the confidence. And from which he, Razvan, always pulls out the best.

The Cabaret - and the variety, and the entertainment show - in which the theater, music, dance, politics and trivial, the light and the shadow, the good and the evil blend together... have always used successful recipes and have assessed resounding resonances names in history. There, on the stage, unacceptable truths are said, intense feelings are confessed, hidden thoughts, some of them guilty, are made ... politics with delicacies at any time, anytime and anywhere is made. BUT! Although the recipe seems easy and at everyone's fingertips, making the entertainment show is ... an art of elegant appearances, insinuating gazes, double-meaning replicas, healthy laughter ... and supposedly a genuine sense even if it is dangling dangerously on a thin knife blade. It's easy to make the laugh ruddy and bold triggering immediate stormy reactions ... It's much harder to make it refined and discreet ... suggesting, raising just a little piece of the lace, looking stealthily towards the truth you never show brutal nude but always edified by the aura of the theater's reflectors.

Zaraza manages to be a contemporary model of the top quality magazine show. Performers - artists of the specialized section of the "Toma Caragiu" theater in Ploiesti. Directing, choreography and costumes - Răzvan Mazilu. The text and the pretext of the show - Daniel Chirila. The decor - Ioana Smara Popescu. Shaken by the alleged dust of a provincial theater, artists give free play to musical talent and acting. They can do it easily, driven by a spirited and open mind that, from diverse perspectives - stage play, choreography, costumes - forms an artistic whole without cracks. Everything is harmonious, everything flows logically, and everything amazes and delights. We have admired and applauded every number. If I liked something more ... the answer is yes, yes yes, in a sequence of musical numbers, spoken and ballet prose. To the voices, of course Nico, a spectacular show! At the theater with music, the stage of Carol of Ilea - Elena Lupescu - the two performers, Manuela Alionte Frîncu and Cosmin Şofron, enjoyed their taste. At personal achievements, I appreciate the performance of actor George Liviu Frîncu in the role of Ion Pribeagu (and Şchioapa!). Although in episodic appearances, I cannot but remember in this list (subjective!) Preferences Mihaela Duţu and Rodica Alexandru in the Cross of the Stone scene. The street of the desert. And the list could of course go on with all the other performers I'm going to appreciate, and now I call them, in the order of distribution, Dana Vulc, Andrei Radu (Cristian Vasile), Karl Baker (Ionel Fernic) Ion Popescu, Ion Radu Burlan (Constantin Tănase), Daniela Răduică (Maria Tănase), Marius Balan (Zavaidoc), Romeo Zaharia (Jean Moscopol), George Capanu (Titi Botez), Robert Oprea (Nelu Ficat) (Terente), Alexandru Vasilescu (the boy with newspapers) and the members of the ballet band of the "Toma Caragiu" Theater Department of Ploiesti - soloists Loredana Bădică, Răzvan Hanganu and Ioana Măcinic, Roxana Văleanu, Lucian Vasilescu, Robert Anton.

As the title of the show, Zaraza, says, the story goes back in time - but remains in its deep detail - to a period of history preserved in the aura of Bucharest - the little Paris. After reading the novel Zaraza written by Andrei Ruse and the volume Why do we love the women of Mircea Cărtărescu in the mind and soul of Răzvan Mazilu "... the wondrous box opened: seductive stories, decadent stories, real events and urban legends, characters mysterious and charismatic figures, Charleston, tango and hora, romanticism, fatal dive and dandy-men, prostitutes and knives, Alhambra, the fairs of the Sons, kings, mistresses, magazine stars, Stone Cross, adventurers, melancholy, nocturnal encounters, passionate love and suicide of love (as if I read the monumental column of a harsh magazine today!). Together with the playwright Daniel Chirilă (a revelation in a poor landscape) and we chose the most interesting, more full of echoes in the current, more seductive happenings, from Romanian interwar entertainment. "(from the program of the hall - the original newspaper Zaraza - of the series.) The call to the fantastic interwar Romanian artistic life seems to be, at the beginning of the 21st century, a definitely successful fashion. However, the steps have not yet come to the level of a two-and-a-half-hour musical theater show with a story. Zaraza is, in this context, a unique one. Such a show can only be the result of a devoted teamwork made up of professionals. Only words of praise for the members of the Estates section of the "Toma Caragiu" Theater in Ploiesti. And long flask Zarazei.