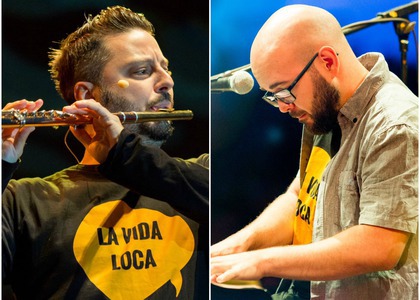 Last night, at the Big Hall of the Cultural Center of Bucharest (ARCUB), the tournament 'La vida loca' came to an end. The flutist Matei Ioachimescu and the Venezuelan pianist Alfredo Ovalles have already visited 9 cities and arrived in Bucharest on the 18th of March: 'That was such a well-received tour. This is not the first time we undertake something like this. This is actually the third edition of the 'La Vida Loca' Tour. We visited 9 cities, having 2 different programmes; one of the programme dealing with the Latin American music and the other one, the one which ends our Tour in Bucharest tonight is, if you want to say so, some kind of a journey around the world, a cruise that crosses different countries and cultures.

The Tour will also go to some European cities and the two musicians promise to even bring with them the spring. They wanted this and last night they succeeded in undertaking an exhilarating trip along with beats of salsa, tango, jazz and Turkish, Armenian, Russian and Japanese folklore, all of these included in a crossover programme so much loved and appreciated by the audience. Their programme embedded the very first two absolute auditions signed by two contemporary composers who are very-well appreciated in the Viennese cultural space: Margareta Ferek Petric and Cătălin Ştefănescu Pătraşcu. The flutist Matei Ioachimescu has spoke about their musical incursion around the world:

'What we really do is presenting the music as it is. Besides, we tackle a lot of music styles and music genres as we are educated in the spirit of the classical music. We move away from this to some touches of the progressive pop rock music, of jazz and of the latin jazz music. We have two compositions, the very first auditions. We are also the lawyers of the contemporary music. What we are trying to do is helping the listeners getting used to the music nowadays. The audience loved this kind of programme heartily and the two of the musicians explained their musical proceeding.'

Just as Matei Ioachimescu and Alfredo Ovalles hoped, the audience danced in their seats and sang together with the two musicians. At the end of the performance, the audience strongly asked for an encore: 'Our focus of interest is to portray music differently, showing its enjoyable, harmonious feelings, but also the aggressive and painful ones. We aim to make people dance in their chairs and spend a wonderful time, letting go all their preconceptions towards the new music because this sort of music is for them and theirs at the same time.'