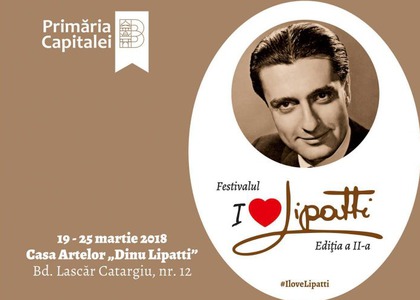 A new festival dedicated to Dinu Lipatti, hosted by the new cultural center bearing his name

The Dinu Lipatti House of Arts Cultural Center has been inaugurated on Monday, the 19th of March, exactly on the day that marks 101 years since the birth of the Romanian pianist and composer. The house on the Lascăr Catargiu Boulevard where Dinu Lipatti lived during his teenage years has been rented by the City Hall of Bucharest Municipality and will be introduced in the city's cultural tour. Also, from Monday until the end of the week, the house will be hosting the second edition of the I love Lipatti Festival, whose first edition took place last year under the aegis of the House of Arts, District 3.

Yesterday, on the second night of the festival, we have attended a conference where the musicologist Grigore Constantinescu delivered a speech about Dinu Lipatti as portrayed by the famous British record producer, Walter Legge, in 1951:

And in the second half we enjoyed the young Romanian pianist's recital. Mihai Ritivoiu, who now lives in London, played pieces by Lipatti, Chopin, Mozart and Schubert and ended his programme with Sonata no. 1 in F sharp minor by George Enescu, a complicated opus interpreted in the last years on many stages by Mihai Ritivoiu, whose confidence and deep understanding of the piece's subtleties accomplished an interpretative result of great quality.

At the end of the night, the pianist Viniciu Moroianu informed me about the inauguration of the Dinu Lipatti House of Arts. One could listen to the pianist at the end of the festival, when he will present a part of the whole solo piano pieces by Lipatti:

"A major event and at the same time, an event close to the heart of the Romanian music world. I have passed by this house many times and I never knew that Dinu Lipatti had lived here for 13 years. It was some sort of forbidden paradise. It has been beautifully and tastefully restored, as one can see around, and for me, it is an absolute delight."

Alice Barb, the director of the festival and of the Dinu Lipatti House of Arts Cultural Center:

"The inauguration of this institution, for renting of the Lipatti House, for its sanitation and the preparation for opening it to the public, happened in record time, in about two months. People have worked day and night so as to open the house yesterday, on Dinu's 101 anniversary, as we have promised him. It is a cultural center. Unfortunately, in Romania the museums are only visited on the free museum night, which is kind of sad. I have been asked to open a museum, a memorial house… no! My idea has been clear from the start. I suggested the Mayor to inaugurate a cultural center, a house of arts where artistic events could be hosted from morning to dawn."