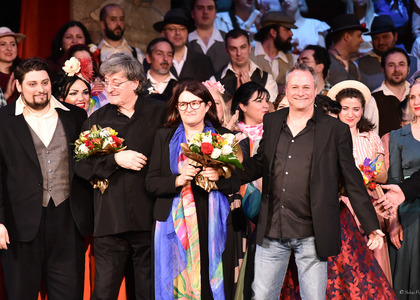 Ștefan Ignat, the acting director of Romanian National Opera brought a new performance this season, just as he announced in an interview, namely the operas "Cavalleria rusticana" by Mascagni and "Pagliacci" by Leoncavallo.

The two works haven't been played at the opera since 2006. This is why director Ion Caramitru and stage designer Viorica Petrovici had such a hard mission, given the short time frame, Miss Petrovici said:

- I tried to create the idea of a village from Southern Italy, but then I decided on a town called Madera. The time was very short - that was our problem. We started studying the opera and listening to the music late in January as to see what was all about and it all went well. We worked on other shows as well and everything came together.

This is a detailed reconstitution of the Italian village from Sicily. If you love Italy it is impossible to dislike this performance with beautiful costumes and street shows. According to two of the protagonists, mezzo-soprano Maria Jinga who played Lola in "Cavalleria rusticana" , the second opera, Pagliacci", was a performance where all the artists enjoyed themselves:

Maestro Caramitru knows how to highlight every character. I think that the collaboration with Miss Petrovici benefits all of us, both the artists and the audience as well. He creates unforgettable scenes. His shows are vivid, which is why I invite all those from Bucharest, and even those who are just passing through, to come and see these two performances.

I worked hard. And I am glad that it turned out to be a success; we had an amazing audience and a wonderful team. I felt great. I also collaborated with maestro Caramitru at the premiere of Tchaikovsky's opera Eugene Onegin in 2009. It was an amazing experience just as this one.

In terms of music, the cast was fairly balanced. For the most part, the orchestra under the baton of conductor Johannes Wildner, played homogeneously without desynchronizing too much. Moreover, the choir had an active role thanks to Ion Caramitru's staging. In "Cavalleria rusticana " we had the chance to listen to soprano Lăcrămioara Cristescu who played Santuzza - she has a pretty stern voice, but she was able to handle the challenging role next to Alin Stoica - in the role of Turiddu - who's got maybe of the best tenor voices that the Opera has to offer. The same goes for mezzo-soprano Maria Jinga who played the charismatic Lola. The cast was completed by baritone Cătălin Țoropoc who played the role of Alfio. It seemed to me that the opera "Paglaicci " had a less favourable cast. Canio was played by our guest, Daniel Magdal, a tenor who excels only by singing in high registers. The other roles were shared between the director himself - baritone Ștefan Ignat, an experienced performer and an outstanding actor who payed Tonio, the young baritone Alexandru Constantin - in the role of Silvio -, soprano Crina Zancu as Nedda, which was the perfect role for her voice and Lăcrămioara Cristescu as Santuzza.

The evening of 31th of March was marked by a lively atmosphere, lots of flowers and standing ovation. The audience enjoyed the staging and they had a positive feedback just like soprano Silvia Voinea:

I want to say that I am downright thrilled. And I am very happy. Ion Caramitru made them dance and sing, all the while leaving the content of the opera unaltered, emerging us into the Sicilian atmosphere and into the world of the Italian street theatre.