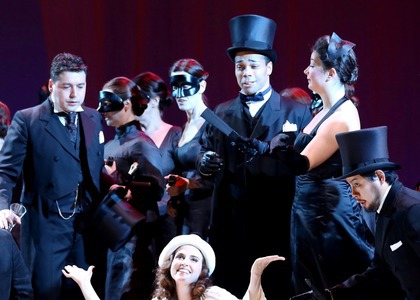 Viennese lyrical scene, in black and white (with a little red) (I)

"No ghost comes to us more easily and dressed in the most varied costumes than Loneliness and one of its most hidden masks is called Love." (Artur Schnitzler). It seems that this could be a starting point for the presentation of the La Traviata show, which the late Austrian director Hans Gratzer has presented on stage at the Volksoper in Vienna. A striking show, especially by combining the classic sprinter of the comedy dell 'arte with the contemporary austerity of solitude, a disease that we are increasingly suffering of and which is even more aggressive in the future. Gratzer's vision is full of fantasy. A group of dead-headed people are hanging around in the strangest moments. When in society, Violeta is dressed in the white suit of Pagliaccio / Paiaţă, with a pompon (with drawings from 1600!); when she's alone, she wears a simple, white, immaculate dress. Around her there are serious, impersonal costumes, evening dresses and dresses in black and white. An amorphous mass of expressionless faces: those alive, as apathetic as the dead ... A few red spots: Florei's letter (act II) by which Violeta is invited to a party, arrives in a large and red envelope; the costumes of the gypsies and torturers (act III) are red ... The scene is empty ... only one bed and a chair, Violeta's bed of suffering, the seat of the one who watches her. And the curtains, white, long, transparent ... symbolizing the impossibility of communicating, the boundaries between dream and reality, the boundaries between life and death .... For the first time I saw these wall-curtains in Castellucci's famous Tannhäuser, on which I have watched not long ago on the stage of the Bavarian Opera in Munich and about which I wrote here with an overwhelming enthusiasm. And I'll see them in Otello ... In Gratzer's vision, everything that's going on is not a reality, it's just the result of the sick imagination of a single woman, shaken by fever. The last act is the most enlightening in this respect. Characters do not look to each other, do not interact. Violeta would like to tell Alfredo ... he would like to tell his father ... and he wants them to answer, with the words he wants so much to hear. But the dream does not come true. The idea is not new. New is the courage with which the Austrian director assumes these two parallel worlds throughout the show. And pushes the grotesque to the limit of the bearable - how else could I explain the ballet scene in Act III where the proud toreador is a bastard dressed in a brilliant suit and Carmen's adorable is a capricious, vulgar and aggressive transvestite ... " The world is a masquerade: the cheek, the clothing, the words ... all are pretended, all want to be seen differently than they are, all want to deceive, and no one really knows himself. as Francisco de Goya would say.

The reader would be right to ask at this point: and where is Verdi?! The resonance is simple: he is in music. Just like the drop of water that effortlessly takes the shape of the vessel in which it is placed, Verdi's Traviata can feel comfortable in any form of spectacle. Especially if the interpretation is exceptional. Just like the show I'm commenting on. The empty scene is filled and animated by the voices and the feelings of the performers. Gesture reduced to the minimum leaves room for expressing music and voices. Distribution is perfectly harmonized, every voice, ideal for the role it gives life. American Rebecca Nelsen is a lyrical soprano with a spectacular color but also with the ability to support the inside, heavy phrases and ample breathing. The nature of the game is complemented by the appearance of a lack of effort in singing. In the dialogue with the partners, it gives meaning to every word and sound color, to each situation, to each and every experience. In her dress suit, there is a Violet as credible as the one dressed in the sumptuous vintage dresses adorned with traditional camels. Her interpretation - vocal and scenic - greatly fits Giuseppe Verdi's music. The soprano found a partner in South Korea's tenor South Korea JunHo You. Formed in Munich, the singer has already been appreciated and applauded in roles such as Don Jose (Carmen), Rodolfo (Boema), Edgardo (Lucia di Lammermoor) or Tamino (Magic Flute). Since 2011, she is part of the Volksoper team in Vienna. The strong and beautifully vibrated crowd in a wealth of nuances, brilliant acuteness, the playful but expressive play are some of the qualities of the young musician. To add the elegant and graceful scene. An elegant appearance and role-playing was also appreciated by Germont's father-father, Sangmin Lee, South Korean himself. The penetrating and warm voice, loaded with frank expressiveness, the result of profound inner feelings, conquer and delight. Impeccable breathing, perfect phrasing for music, impeccable harmony with distribution partners have prompted enthusiastic applause.

This wonderful trio was perfectly surrounded, musically and scenically, by the Volksoper choir and ballet. The show was led by conductor Wolfram-Maria Märtig, a musician with an interesting biography. He came from Hamburg and, as a pianist and horn player, he won several important international competitions and benefited from studio scholarships. He was a soloist at Klassik Philharmonic Hamburg. He was co-founder of the Universität der Künste in Essen. He is a composer with symphonic and chamber works often performed. In 2004 he also conducts studies and works in various German lyrical theaters. Starting with the 2012-2013 season he is conductor at the famous Staatsoper in Berlin, "Unter den Linden", and from the 2014-2015 season he is also conductor at the Volksoper in Vienna. We have provided all these biographical data to explain the entirely different way in which Wolfram-Maria Märtig approached Verdi's masterpiece. A former instrumentalist in orchestra, an orchestra and arranger of musical scores for different bands, a composer ... can understand music through multiple ways of access that enrich and diversify their interpretation. We have delighted the beauty of the whole in which each detail is put in place, we have appreciated the splendor and complexity of the Verdicts orchestral writing, both in the purely instrumental moments and in the accompanying situations in which your so- it ... but regains its role in the expressiveness of the whole. The conductor respects and loves the voices, understands them and helps them. He has an elite orchestral ensemble. And so all the conditions of a representation of high artistic value are fulfilled. Traviata on the Volksoper scene in Vienna is surely a show worthy of the largest and most important lyrical theaters in the world. (Cristina Sarbu)