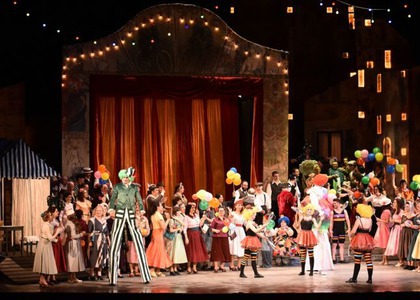 A show for the audience

An event at an international level, taking place on the big stages and the small stages of the lyrical theater alike, in the name of "keeping the genre alive", the opera performance is subjected to superficial or profound make-overs, transforming something that seemed old, dusty, outdated and anachronistic into something new, fresh, modern and anchored in the contemporary reality. For this extraordinary transformation, many theater directors have been summoned, and most of them offered to help because of their desire of experimenting new directions. Being used to professional actors, most of them have deliberately and firmly tipped the scale in favor of theater, paying almost no attention to the musical element, that should be an equal partner in the concept of musical theater. The result was not as expected and the stagings seemed to be in antithesis with the singers, who were simply sacrificed on the altar of the theater. Only the best, the most talented, the most ambitious managed to even the odds between a singing actor and an acting singer, who dominate the grandest stages of the world, earning their weight in gold as payment. They have truly shown us that it can be done! There are very few people that do not obey to the directorial vision, putting their stakes on ample voices, impeccable vocal techniques and an overwhelming expressiveness. It would seem that only a glimmering high note, an interpretation refined to perfection or a phrase sustained by a seemingly never ending breath will ensure a round of applause. Most of the artists simply try to sing their best or to act their best, listening to what they're told, sometimes with a clumsiness that stirs only laughter or pity.

In search of the success that is mandatory for survival in the contemporary world of musical theater, the directors opt either for shocking, yet well sustained interpretations, that are justified by a recognizable anchoring of the subject in today's reality, such as Graham Vick's Falstaff (in 2015 at the Bucharest National Opera), or for the politicization of the show, just to give it a modern sense, pushing all the buttons that transform the echoes of the past into the sound of the present, such as Fidelio, that was put together by the same Graham Vick (in 2016 at the Bucharest National Opera). In the past few years, we have had the unfortunate attempt of renewing a lyrical theater performance, referring, of course, to Alfred Kirchner's Tosca (in 2014 at Bucharest National Opera), where everything theater related (directing, sets, movement, character interaction) seemed to have been designed against the singers an against the music. All the aforementions shows have, of course, an experimental status, (more or less valuable).

Director Ion Caramitru approached the two titles of lyrical theater with the valid wish that if he wore down everything he had at his disposal, he would be able to create a successful musical theater performance. He had a great help from the two life stories he had up his sleeve, the music that was transformed into a hit song by the audience, and almost all the solo singers that he worked with. Those who had no particular problem with the sheet music managed to bring to life the characters envisioned by the composer and the director, keeping every ounce of intended complexity and brilliance. I must start with Daniel Magdal, who played Canio, and Lucian Petrean as Tonio. Both carefully and cleverly structured their characters. The story wears them mercilessly, with a sickening jealousy, profound and incurable suffering, a boundless desire for revenge that, in both cases, rises from the same source - unrequited love. Daniel Magda's high notes are powerful and bright, his suffering is sincere, his stage play is believable, with a high chance of emphasis when the character, both musically and theatrically, would benefit from the experience of numerous performances and the actor and the singer would become one.

Detached and confident playing an extremely generous, yet highly demanding role, Lucian Petrean makes good use of strength, colors and nuances of a splendid baritone voice. In a powerful and fortunate contrast with the two actors, Marta Sandu, as Nedda, is brilliant, ethereal, fragile and powerful all at once. Her mellow voice seems to fly through the staves, having no problem reaching the high notes, and easily displaying happiness, fear, hate and desperation that hide behind the music. The hearing senses are just as enchanted as the visual senses. This statement can also extend to Andrei Lazăr, as Beppe, and Adria Mărcan, as Silvio. This being said, I have presented the full cast of the opera Pagliacci. Although it was presented in the second half of the evening, its artistic character of the performance secured its spot on the first position.

Cavalera Rusticana did not lack respectable voices either. But the performance seems more raw from more points of view, as if the interpreters have yet to become one with the characters. Bianca Mărgean has perfectly sung every note from her part, but we do not see the character of Santuzza in her. Adrian Dumitru's great vocal skills highly recommend him for the part. Although restrained at first, the tenor grows to the point where he successfully impresses the audience. Vincenţiu Ţăranu has a good voice, a light movement on stage, but he still lacks the involvement and the wrath that blind you when your honor has been tainted. I have always admired the splendid voice of Sorana Negrea, but every time, disregarding the part she interprets, I was amazed by the conduit and ease of her stage presence, using the bare minimum of gestures and expressions. Some acting classes are imperative. The evolution of Sidonia Nica as Mamma Lucia was correct, but bland.

Conducted by Johannes Wildner from Austria, the Bucharest National Opera Orchestra have had good and not so good moments. However, the good moments seem to prevail, despite the confusing tempi, the lack of attention to details (including the subtle nuances abundantly found in the two works), or some intense moments that stole the spotlight from the voices - all imposed by the conductor.

We started off from the intentions of directors, we deviated from the subject and we commented upon the artistic achievements of the soloists that represent a huge part of the success received, but now I would like to get back to the theatrical part of these two performances. The idea of a unique space of unfolding for these two stories - a square from the same small village in which, gradually, the church is replaced by the itinerant theater stage - is not a novelty. I won't go too far into the past, I will simply mention the performance of Cavalleria and Pagliacci that I have seen in January 2018, in New York, on the famous MET stage, where one of the greatest directors of the moment, Sir David McVicar, approached the same idea. Bringing authentic circus performers on stage for Pagliacci (little people, clowns, gymnasts, jugglers, all from the Globus Circus in Bucharest) is not original either. Ion Caramitru did not wish to be original, he wanted to build a successful, accessible and popular artistic product. To animate the show, the director brought to stage a variegated crowd in constant movement, being helped by the consistent presence of the choir in both performances. The music may or may not handle this extravagance, but the audience is surely enjoying the spectacle. The scenery and the costumes designed by Viorica Petrovici are austere for Cavalleria or they even lack imagination and color in Pagliacci. Each person on stage becomes a character carefully shaped by the director and embodied by chanters and extras as much as possible. The theater director envisions the details of movement in an ideal scenic picture. Unfortunately, reality is not as perfect and the movement on scene is often chaotic, with details that desperately try to show some expressiveness, like the church representative that rides his bike to the place he is needed, only to take part in what's happening in a manner both desperate and comical, or the amused singers that are waiting to make a move in a certain manner, not because that's how they feel, but because that's what they were told to do. It feels like a game for most of them, and even if they seem to enjoy doing so, this is far from what real theater should look like.

But these are the kind of details that few will notice. Although it's wonderful to see so many young people attending an opera, nowadays audience will accept a dark and gloomy scenery, as was the case for Cavalleria, or dark, but decorated with a bunch of colored lights, just like in Pagliacci, even if the action takes place from dawn til dusk in both stories. Nobody will ask themselves why is there a ballet moment, although interpreted beautifully by Monica Petrică, on the instrumental intermezzo between the two acts of Pagliacci. And the list goes on. The inconsistencies of the translated surtitles should be corrected immediately. After one of Santuzza's lines - "I know you went to Lola's, I've been following you" - she then says "I found out you went to Lola's house from Alfio, her husband, who saw you...".

This chronicle is so long because I wanted to display each and every side of the finished product. The scales are tipped to the positive side of things. The most recent premiere on the stage of the Bucharest National Opera is the performance comprised of Mascagni's Cavalleria Rusticana and Leoncavallo's Pagliacci, that will surely enjoy a long life, an overflowing audience and an abundance of enthusiastic applause. It is an evening that offers a little bit of everything, from bloody drama to circus show, constant movement, be it sad or cheerful, all unraveled in a scenery that leaves no audience member indifferent. We must give credit to the two performances. But even they have to submit to our times. And the times in which we live are highly perceptible to everything surrounding us, using our vision more than our hearing. This is a fact that artists need to take into account, should they want their performance to live on. Be it right or wrong, this phenomenon takes place on all the stages of lyrical theater in the world.