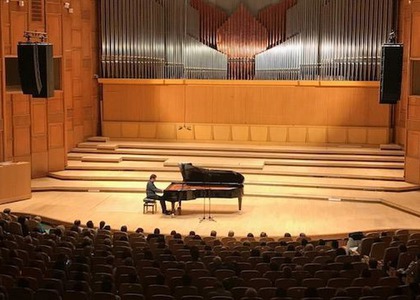 'The Travelling Piano’ has arrived to the Radio Hall

After another 11 stops in different corners of the country, the pianist Horia Mihail brought the Travelling Piano on the stage of the Radio Hall last night. The program of the eight edition of the tour was conceived in the manner of a Best of. The musician proposed first part with the famous opuses from the Classical era. We listened to Sonata No.11 in A Major, Alla Turca by Mozart and the Moon Sonata by Ludwig van Beethoven. We then traveled, through the sound of the piano, into Schumann's romantic Childhood Scenes, and the evening would end with Rhapsody I by George Enescu, in the piano transcription of the composer.

The Traveling Piano, over the 8 years since its course, has gained more and more notoriety among the melomaniacs:

"It's the first time I've been listening to the Piano Traveler. An exceptional initiative! "

"It was a contrast; after Mozart - seraphic, angelic, were the passion and ardors of Beethoven. We come with great pleasure to Mr. Horia Mihail's concerts. "

"I saw him last year at a concert held in Herastrău Park. I came for my favorite composer - Mozart. "

The closing words belong to, of course, the pianist Horia Mihail:

"I have noticed that I have a growing and warmer audience. Probably a larger group of fans has formed and they come to my concerts. That can only gladden me. As a matter of fact, I have noticed this throughout the country, where I've been travelling so far. And such music cannot be received unwell unless it is played badly. And I'm striving not to do that. "