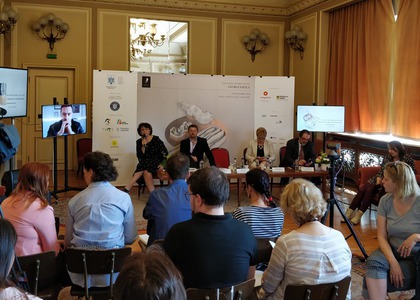 Today, April 25, starting from 11.00, the press conference announcing the 16th edition of the "George Enescu" International Competition took place at the Romanian Athenaeum. Among the speakers were Mihai Constantinescu - executive manager of the competition; Liliana Staicu - director of Radio Romania Music; Mădălin Voicu - state secretary at the Ministry of Culture and National Identity; and Mircea Neacșa - director of TVR 3.

The 16th edition of the "George Enescu" International Competition takes place between September 1-23 in Bucharest and has a record number of young contestants - 400 young musicians from 46 countries on 5 continents. With a 26% increase in the number of enrollments from the 2016 edition, this year's edition of the "Enescu" Competition features a remarkable Romanian presence: in total, there are 36 young Romanian contestants, mostly at the Piano section. China and the UK have doubled their number of contestants from 2016, while Italy has three times more young musicians enrolled in the competition.

Here are some moments from the conference:

"This year, the Competition - as well as the "George Enescu" Festival - celebrate their 60th anniversary. We are happy that this year we have a record number of enrollments. We would like to say that a pre-auditioning will take place, since there are so many contestants - 121-126 per section. The juries are a little different from the last edition - they are important personalities who come for the Competition. Phillipe Entremont is the president of the Piano Jury; for the Violin - Pierre Amoyal; for the Cello - David Geringas; and for Composition - the president of the jury is Zygmunt Krauze, alongside Peter Ruzicka, Adrian Iorgulescu and Cornel Țăranu."

Liliana Staicu, director of Radio Romania Music: "For this year's edition, the two radio stations will do a live broadcast of the Orchestra Finals on September 11, 17 and 23. We will also record all the contestants' performances starting with the second round, as well the guests' recitals. Of course, afterwards we will do a series dedicated to the competition, with the recordings of the guests' recitals."

Mădălin Voicu, state secretary at the Ministry of Culture and National Identity: "For us, as partners, we will take care that everything goes as it should and as befits such a prestigious event."

Vladimir Jurowski, the artistic director of the competition, was also on live. He talked about the musicians' potential of becoming role models for the society.

"Discover talent, reward the effort, capture the emotion" - these are the fundamental ideas of this edition. For more information, follow our future articles and go to romania-muzica.ro.