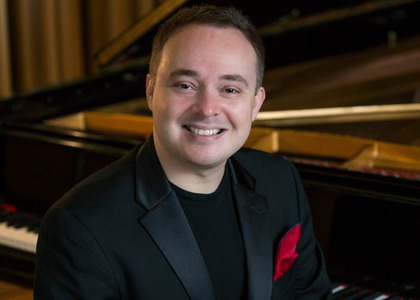 The New Beethoven by Matei Varga

The two concerts of the Bucharest Philharmonic this week were artistically "patronized" by soprano Mariana Nicolesco, old friend and supporter of the invited artists: pianist Matei Varga, conductor Elio Boncompagni and musicologist and writer Paolo Isotta.

It's been 15 years since Matei Varga performed for the last time with the George Enescu Philharmonic Orchestra. The Bucharest pianist, settled in New York, returned to the Romanian Athenaeum stage yesterday night, within the current season. The program chosen by conductor Elio Boncompagni was entirely with Beethoven pieces, comprising the Uvertura Leonora No.2, Concerto No.4 op.58 in G major for piano and orchestra and the 5th Symphony in C minor. It's not by chance that three of the chosen scores belong more or less to the same period of creation, being written by Beethoven around 1805.

The actual concert started after the short speech of the soprano Mariana Nicolesco, in which she lauded the personalities of the three guests and recalled the release of Paolo Isotta's book - Another song of Mars. The Song of Love. The volume appeared last year at Curtea Veche publishing house, but the author was also pesent for the autographs in the foyer of the Athenaeum.

The structure of the evening was the traditional one, opening up with Leonora 2, in fact the first attempt of Beethoven to preface his only work, Fidelio. As I was to find out later, Elio Boncompagni, aged 85, is a very temperamental orchestra leader that prefers smooth tempos and dynamic colors, which I would rather describe as being mate.

The concert was more diverse and the soloist oscillated always between rigor and freedom, between fragile and powerful; I heard pieces of the so-called Mozart style, very delicate lyrical passages, pauses that left us hanging over time, but also moments of force, lots of agility - all in a very clear progress. Matei Varga performed for the first time last evening the score of the 4th Concerto by Beethoven and included -to the audience's surprise and delight - his own cadences, thus reviving a tradition of soloists from hundreds of years ago. After several minutes of applause, the soloist sat down at the piano (the same instrument he used it for the first time in 1994) and told us that we know for sure what comes next as a bis; he continued with Beethoven, Für Elise...

During the concert's break, I went to congratulate him. Meeting with many other well-known Romanian musicians, friends, colleagues or former teachers of Matei Varga, who came to hug him.

"I love the concert! I have to confess that I love all five Beethoven's concerts. I could not make a huge difference between them. I know that 4th concert is generally considered the most poetic, maybe the most beloved in a certain sense. Of course it's a concert perhaps in re minor, I would say, together with Schumann Concerto and for sure Mozart. There are some concerts that pianists and musicians love unconditionally."