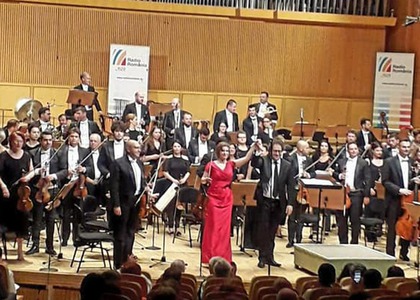 On Friday, 1st of June, the National Radio Orchestra proposed a French music evening and the ensemble was conducted by Leo Hussain, the head of the orchestra that the Romanian audience followed already during the "George Enescu" International Festival.

The first work of the program was the «Pelleas et Mélisande» Suite by Gabriel Fauré, followed by the two works in which we admired the young viollinist Ioana Goicea, soloist of the National Radio Orchestra. She interpreted Meditation from the «Thaïs» opera by Jules Massenet and the «Tzigane» Rhapsody by Maurice Ravel. Two extremely different scores, but performed very well for which Ioana Goicea was applauded for good minutes. The first part of the evening ended with the soloist's bis - one of Paganini's whims.

"The soloist was a surprise! It was higher than I thought and I was expected. She particularly catched my eye, even through the way she chose the bis."

"As far as Ioana Cristina Goicea is concerned, she was very good tonight from a technical point of view. I could not say spotless, but it was very good. I especially liked the Thais Meditation. It seemed to me that she phrase there extraordinarily beautiful and sensitive."

The second part of the evening was dedicated to Enescu's music. Leo Hussain, head of the orchestra, who two years ago presented the premiere of the "Oedip" opera by Enescu at the Royal Opera House Covent Garden, proposed to the audience at the Radio Hall an opera from the adolescence of the Romanian composer - the forth symphony of the school.

"Extremely modern the symphony! It is very actual and I could say that it places Enescu beyond the national borders. The Romanian seam is missing. It was very energizing. I think it is the first time I see the conductor. It seemed to me very precise and demanding. I liked Enescu very much, how he saw Enescu - as a beautiful flow - how he dozed the energies. I liked it! For me it was a very successful night."

The conductor Leo Hussain said the following about his presence of the stage of the Radio Hall:

"For me it was an amazing concert and that is because of the welcoming audience at the Radio Hall. Every concert is unique thanks to the ones who participate there because they also contribute to our energy, the musicians. What we perform concerns to a large extent also those present in the hall. That is why there will never be two concerts the same, and the audience from this evening motivated us to present ourselves as well as possible. I enjoyed working with Ioana Goicea. She is a very musical young woman and we worked together very well these days. She performed two contrasting works and this way we saw two sides of her in one concert, that is wonderful. "