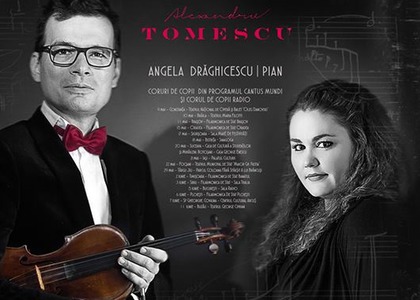 Alexandru Tomescu:I'm very glad to be here in front of you alongside pianist Angela Drăghicescu. She came here specially to perform this tour with me and play Romanian music. Romanian music always brings people together. My joy is even greater because I find myself right here, on the concert stage of the Radio Hall. You might not know, but I have been the soloist of the Radio Orchestra for over 16 years and this place is more than a home to me, because it's the place where I grew and developed as an artist and it's the ideal way of sharing the most powerful emotions that music inspires.

Last night, the International Stradivarius Tour arrived in Bucharest. What you just heard were the words with which violinist Alexandru Tomescu greeted the music lovers present in the Radio Hall.
Already at its 11th edition, the tour is called The Ballad - A Century of Music and is dedicated to the 100 Year Anniversary of the Great Union. This year, Alexandru Tomescu invited Romanian-born pianist Angela Drăghicescu, who lives in the USA, to join him on stage.

Here is how the two musicians designed the program of the tour:

Alexandru Tomescu:When we put together the program for the evening, I thought first of all of putting together a program with composers other than George Enescu. Three years ago, I had sung the complete main works for violin and piano by George Enescu and so I thought maybe I had done wrong to the composers who lived in the shadow of the great Enescu. By putting this program together, searching in the libraries, I discovered many works that are worth being known and brought to light.

I could hear a selection of diverse and inspired music which debuted with the Little Suite Op. 3 for violin and piano by Mihail Jora and also featured works by George Enescu, Dinu Lipatti, Dumitru Capoianu and Tiberiu Olah.

And the evening ended with an arrangement for violin, piano and choir of Ciprian Porumbescu's Ballad, arrangement made by Grigore Cudalbu and interpreted with the Radio Children's Choir conducted by Voicu Popescu:

It is, of course, a great opportunity to speak now about all the choruses that could enter the project. It was a very special moment, at least for our children. I know exactly what it means, I know how nervous they went out there, how nervous they left the stage and I know this will be a standard for their artistic life from now on.

We'll end on a light note, with some thoughts from members of the Radio Children's Choir:

'One day, the conductor came and told us we would play alongside Alexandru Tomescu in a concert and for us it was a very big opportunity. We are honored for being able to perform with Alexandru Tomescu.'

'It was a beautiful experience, especially since we performed with Alexandru Tomescu. It gets you excited and gives you a pleasant feeling.'

'It was wonderful, because we performed with the greatest Romanian violinist and it was very pleasant. Of course, I was nervous. I'll never forget the experience.'