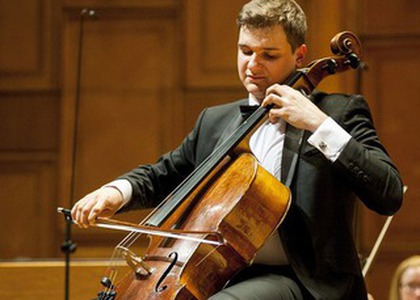 Andrei Ioniță in Concert at the Romanian Athenaeum

On Thursday, 7th of June, the young cellist Andrei Ioniță and the conductor Cristian Badea, together with the Bucharest Philharmonic Orchestra, have proposed an evening with Russian music.

Andrei Ioniță was on Thursday, 7th of June, the soloist of the Cello Concerto No.1 in E flat major by Dmitri Shostakovich on the stage of the Romanian Athenaeum. At the age of 24, the musician proved both his interpretative maturity and his technical ability, presenting a romantic vision towards one of the most challenging works for cello. The sound and stylistic congruence between the soloist and the orchestra was certainly due to the conductor Cristian Badea. He conducted the Philharmonic Orchestra both for the musical performance of the Romeo and Juliet Overture in the opening of the first part and for the Francesca da Rimini Symphonic Fantasy in the second part, both interpretations surprising the essence of the style of Tchaikovsky. The two musicians collaborated for the first time in the spring of 2016.

"It's the second time I work with the George Enescu Philharmonic and with maestro Christian Badea. It is he who brought me here for the first time two years ago. I am very glad to see him again. I am also glad to show to the Romanian audience my musical evolution in the last years. I have not sung here since autumn, from the Enescu Festival. He is not only a conductor, but also a mentor. He gave me a lot of tips with regard to my career path. It is a great pleasure for me to sing today on the Athenaeum's stage. This concert is my soul concert. I had absolutely electrifying experiences at the contests I attended, especially the Tchaikovsky Contest. Shostakovich is the composer with whom I identify the most, with his passion, tragedy, but at the same time, the ray of hope that he reaches."

Already known for being the first Romanian winner of the 2015 edition of the Tchaikovsky International Competition in Moscow, where he performed the Concert presented yesterday evening at the Athenaeum, Andrei Ioniță is appreciated by the Romanian audience and the music criticism as a young valuable interpreter.

"I listened to him in live transmissions of the Tchaikovsky Contest, I followed him with great fervour and I was very happy that he won this very important competition. And now the revelation was confirmed, but I don't want to overlook the performance of the Symphonic Orchestra of the Philharmonic conducted by the maestro Christian Badea in a great evening, which makes this concert being one of the most important of this season that is coming to an end".

Other opinions from the audience:

"I believe this demonstrated not only the fact that Andrei is mastering the instrumental technique very well, but also the way he manages to communicate with the audience. He spreads more than mere sounds and that is, I believe, the essence of Andrei's performance."

The cellist Andrei Ioniță can be listened to this evening too, together with the Bucharest Philharmonic Orchestra at the Romanian Athenaeum, starting at 19.00 pm.