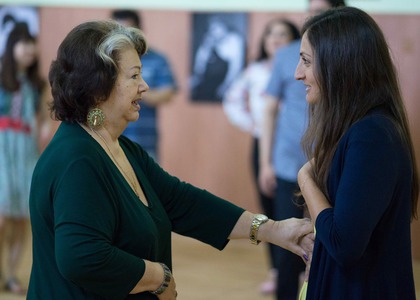 Thursday, 21 June 2018 , ora 14.57
If the second edition of the "Virginia Zeani" International Festival opened on Monday under the sign of pure emotion, I would say that the second and the third day were under the sign of youth and the joy of playing and singing together. The program featured: a masterclass given by the soprano and esteemed canto professor Horiana Brănișteanu (photo) for the 36 contestants that were qualified for the second stage of the competition "L'Assoluta Virginia Zeani", as well as an extraordinary concert meant to capture the soloists' joy of performing alongside the members of the Classis Quartet, as well as the members of the Târgu Mureș State Philharmonic Choir led by Vasile Cazan and accompanied by Maria Antonia Someșan.

To listen to the one next to them on stage and communicate with him - this was the first piece of advice that Horiana Brănișteanu offered to the young students of the master course that was held on Tuesday in collaboration with actor and director Liviu Pancu - who is also the founder of the "Scena" Theatre in Târgu Mureș, where the first meeting was held - and yesterday in collaboration with director Rareș Budileanu at the community centre in Solovăstru, Mrs. Zeani's native and beloved village. To connect to the ones around them, but also to express themselves through the artistic act with all their being, without holding back, which is almost impossible to do at the beginning of the course, but which can be achieved by its end. Also excellent and well-timed were the observations made by Horiana Brănișteanu to each and every student: technical suggestions, quick solutions for improving their interpretation - both through technique and expression - so that, by the end of the course, everyone stated they were extremely grateful and they would enter the competition today with a lot more confidence.

As for the extraordinary concert, hosted last evening by the "Eugen Nicoară" cultural center in Reghin, it had a festive opening, as the great soprano Virginia Zeani received the title of Honorary Citizen of the Municipality of Reghin. The award was handed to the general manager of the festival, Marian Giurgiu, by Maria Precup - the mayor of Reghin. The concert also had a musical opening, with a Chopin mini-recital held by pianist Mădălina Pașol.

It was a choral concert in its first part, mixing very diverse scores, from "Madonna mia cara" by Orlando di Lasso to the famous choirs from Verdi's "Nabucco" and Mascagni's "Cavalleria rusticana", performed by the Târgu Mureș Philharmonic Choir led by maestro Vasile Cazan; in its second part, it was an opera concert, featuring the singers: soprano Eszter Zemlenyi from Hungary (winner of the second prize of the competition "L'Assoluta Virginia Zeani", last year's edition), bass Slavis Besedin from Russia and Ștefan von Korch, a tenor from Oradea. They offered the extremely enthusiastic and numerous audience in Reghin famous arias and duets from Mozart's "The Marriage of Figaro" and "Don Giovanni", Verdi's "Rigoletto", Donizetti's "Linda di Chaminoux", Bellini's "I Puritani" and Mussorgski's "Boris Godunov", as well as the famous Russian romance Ochi Chernye or Augustin Lara's Granada. The moments that received the most applause were "Le filles de Cadix" by Delibes - performed by soprano Zemlenyi Eszter, "Varlaam's Song" - performed by bass Slavis Besedin and "La donna è mobile" performed by Ștefan von Korch. The entire opera program had the musical support of the Classis Quartet from Cluj-Napoca - what an excellent partner in music! - and I would like to congratulate Peter Kolcsar, who was also the artistic director of the "Virginia Zeani" International Opera Festival, a true factotum during this week that dedicated and paid homage to L'Assoluta Virginia Zeani.

Right now, at 10.00, starts the first stage of the canto competition. The semifinals will be tomorrow, and on Saturday we will learn the names of the winners. Tonight there will be a sacred music concert at the Roman-Catholic Church, which I will tell you about in tomorrow's coverage.