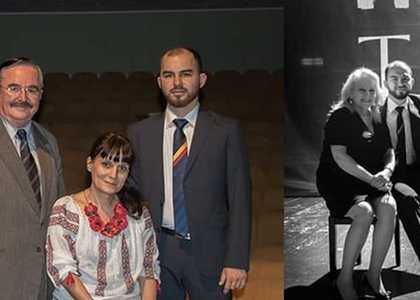 At the second edition of the event called the Transylvanian International Piano Competition in Brașov, initiated and organized by Ioan Dragoș Dumitriu, a festival featuring several recitals will take place at the same time as the competition.

The second recital dedicated to the 100th Anniversary of Romania took place on Wednesday, July 11, starting from 19.00, in the main hall of the Reduta Cultural Center. The protagonists were the members of the jury: Antoinette van Zabner, Corina Ibănescu, Horia Mihail and Ioan Dragoș Dumitriu. The artists offered a pianistic feast, a true music lesson, by performing an interesting repertoire featuring works for piano solo and piano four hands. The special atmosphere that was full of excitement was felt by the audience from the opening moment of the program: a first audition of a score signed by Petre Marcel Vârlan, the Ballad op. 14 on a theme by Ciprian Porumbescu. Pianists Corina Ibănescu and Ioan Dragoș Dumitriu enchanted the audience with the sonorities of this new Romanian work for piano four hand that brought Ciprian Porumbescu’s beloved ballad on stage in a new light. The artists performed two other scores of the same genre from Romanian literature, signed by Constantin Silvestri and Dinu Lipatti. The pianistic feast on Wednesday, July 11, which took place in the hall of the Reduta Cultural Center in Brașov continued with a page by Maurice Ravel, Mother Goose. Protagonists were Antoinette van Zabner, chair of the Transylvanian International Piano Competition jury, and Ioan Dragoș Dumitriu, two artists who simply enchanted the audience with the refinement and expressiveness of their interpretation. The finale of this extraordinary recital dedicated to the 100th Anniversary of Romania highlighted Horia Mihail, a renowned Romanian pianist from Brașov, who is loved and appreciated by the audience in his hometown for his fine career. He impressed us with his virtuosity in the two moments he prepared: Mozart’s sonata, catalogue KV331, and the piano version of the famous Romanian Rhapsody No. 1 by George Enescu. The emotion conveyed was overwhelming, and applauses went on for minutes.

The Transylvanian International Piano Competition continued through Thursday, July 12, with the first stage of the D Category, Young Artists, for young people with ages between 19 and 28. There were seven contestants from China, Japan, the Republic of Korea, Russia, the Republic of Moldova and Romania. For this stage, the young pianists prepared a program featuring the Prelude and Fugue by Johann Sebastian Bach and a classical and romantic work from the 20th century. Today, the jury decides who advances to the next round of the D category, Young Artists, which will take place on Sunday, July 15, 2018. (Photo: Iosif Trif)

P.S. The finalists of the D category are: Anastasia Churbanova and Nikita Volov from Russia, Prigalo Alexandru from the Republic of Moldova, Yu Ueda from Japan and Haoyang Wu from China.