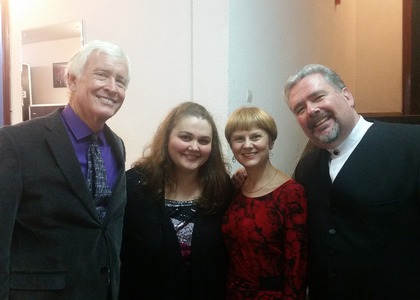 "Happy Birthday, Romania! This is our gift!"

Angela Drăghicescu speaks about the Musical Bridges recital, which brought her to Bucharest together with the American baritone David Small. It was a gift for Romania and, why not, for Radio Romania at its 90th anniversary.

The introduction to Musical Bridges - bridges between the Romanian and American cultures, was made by our colleague Cristina Comandașu:

"The recital tonight is exactly the expression of patriotism shown by Angela Drăghicescu, a Romanian-American pianist. She started out here, in Romania, but 20 years ago, she left the country to settle down in the United States, where she has had a beautiful career. However, she returns here from time to time. For the Centenary of Romania she thought of asking an American musician to compose the lyrics of Mihai Eminescu. I do not know if there is a more beautiful form of patriotism, indeed, but it is also about something else tonight, it is about friendship. We haven't named the recital Musical Bridges by coincidence, because it really is about friendship between two countries, the two cultures that made it possible for us to see this premiere tonight, but also for other performances of these pieces in Romania."

In the hall alongside the others, I watched Musical Bridges - a unique recital in the Romanian music scene, with American works that talk about the tradition of overseas songs, an opus by George Enescu and especially a three-song cycle composed to Romanian lyrics by Eminescu, by one of the most praised contemporary American composers, Dan Welcher. Pianist Angela Drăghicescu and composer Dan Welcher spoke about all of this:

"In 2012 I got my doctorate degree at the University of Texas in Austin. My PhD thesis was about creating a phonetic dictionary for singers who are not Romanian speakers, in order for them to interpret Romanian lieder. I also published this thesis, which after two years came to the hands of the two professors with whom I decided to ask Dan Welcher to write in Romanian the first songs cycle. And thus this beautiful cycle came to be."

"Angela Drăghicescu asked me if I could compose a cycle of songs on Romanian lyrics. I told her that I would love to very much, but I did not know any Romanian poets. So I asked her to recommend me one. Then she told me about Mihai Eminescu, the national Romanian poet. I read his poems and I fell in love immediately. I chose Ce te legeni, codrule, (Why Are You Swaying, Forest Trees) Când însuși glasul (When Even the Inner Voice) and La steaua (To the Star). They express love in different forms: love for nature, for a dear person and for eternity. That is why I put the three songs in this order."

Those in the hall were also impressed by the declaration of love for Eminescu's poetry expressed by an American composer, as well as by the perfect performance in Romanian of baritone David Small:

"It was very nice of the pianist, who did not forget where she had come from, and I understand that she promoted this a lot and commissioned those works. I enjoyed it."

"I was delighted by this interpreter that could pronounce so correctly not only in Romanian, but also in Italian and English. Everyone was at their best!"

And since this concert was about patriotism, about Eminescu, the Romanian poet who inspired Dan Welcher, baritone David Small also spoke about the national American poet, Walt Whitman, who inspired composer Lee Hoiby:

"This cycle is written by Lee Hoiby to the lyrics of Walt Whitman - the American poet. All five songs are remarkable, but I want to draw your attention to the forth song "O Captain, My Captain"; the lyrics are a tribute to Abraham Lincoln after his assassination..."

Those who were at the Sala Radio on the 30th of October were enthusiastic about the Musical Bridges recital, a true musical gift from America to Romania on the celebration of its centenary, and a true lesson in patriotism.