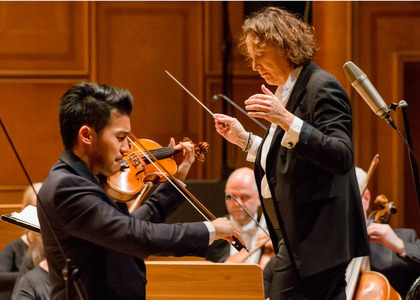 The Last Day of the RadiRo Festival, 2018

The concert performed by the Irish Radio Television Symphony Orchestra ended the programme of RadiRo - the International Radio Orchestra Festival, on the 25th of November. This event was covered by Lucian Haralambie.

"Today's repertoire was really beautiful, very melodic. I was impressed! The Orchestra - also great! And the ambience as well."

Yesterday's event was also the closing concert of the International Radio Orchestra Festival. We interviewed some of the musicians at the end of the programme.

Natalie Stutzmann conducted the Irish Radio Television Symphony Orchestra had Nathalie Stutzmann in a concert dedicated to music by Pyotr Ilyich Tchaikovsky. After the Queen Of Spades overture and the Polonaise from Eugene Onegin, it was violinist Ray Chen's turn to entertain the RadiRo Festival audience. He was the soloist of Tchaikovsky's Concerto in D Major.

"I'm glad to be back in Romania. I visited this country last year, as part of the "Enescu" festival. The audience, as usual, was very welcoming and enthusiastic. As an artist, you feed on the audience's vibes. Their energy greatly contributes to your live interpretation and it becomes the ley to your performance's success. Tonight's performance was great and for that, I must thank the Romanian audience. The idea of a festival dedicated to radio orchestras is amazing. It emphasizes the tradition of these ensembles as well as the importance of classical music, while also having an outlook for the future. I consider myself to be very lucky and I'm happy to have had this opportunity of performing on this stage tonight." - violinist Ray Chen.

The last piece, interpreted by the Irish Radio Television Symphony Orchestra at the RadiRo Festival under conductor Nathalie Stutzmann's baton, was Tchaikovsky's Symphony No.5 in E Minor.

"The performance carried a particular sensitivity and Nathalie managed to get the best out of the orchestra, which is admirable." -was conductor Cristian Oroșanu's statement, who had been present yesterday at the Sala Radio concert. Regarding RadiRo, he stated the following: "I'm really happy for their achievement. I believe it's a great opportunity for the orchestras to unite. The concert hall was full… this event was a delight for me."

The violinist Teodor Andreescu also reviewed the last day of the RadiRo 2018 concert experience: "An interesting performance and an interesting conductor. What I truly admired was that, despite the mark all those years that left on us, the mark of always being in a hurry, Nathalie Stutzmann took her time. And this was mirrored in the overture and in the symphony. She gave us the time and the chance to truly understand what the pieces mean. The orchestra was not perfect and… I can say the same about the concert as a whole, but I believe that the concert's imperfection was what I actually adored. Because even though it was imperfect, the purpose was not to achieve perfection, but to perform a very honest, a very sincere concert and kneel down before the music.