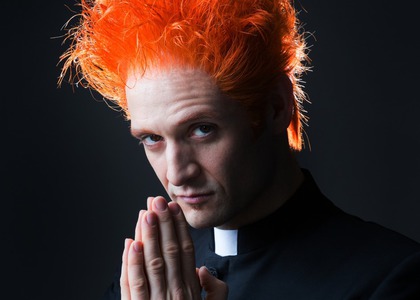 A BaRock opera? Yes. Contemporary musicians, inspired by the masterpieces of the past, are trying to revive these pieces, giving them a modern sound. Keyboards, electric guitar, bass, saxophone, rich and diverse percussion, very powerful rhythms… they all offer a new and fresh universe of sound to the voices who sing them correctly. Especially if old instruments, such as the lute, the theorbo, the baroque violin, or the viola da gamba, are added to the electronic instruments. Orfeo 2.0 was one such successful experiment, a baroque opera created by Massimiliano Toni in 2017 based on the piece with the same name by Monteverdi from the 1600s.

The term "rock-opera" first emerged in the 1960s. It changes depending on the musical style approached by the musicians: metal opera, punk-rock opera, rap opera and so on. There are many examples: Hamlet by Johnny Hallyday (1976), Excalibur: La Légende des Celtes (1998) and Excalibur 2: L'Anneau des Celtes by Alan Simon (2007), Romeo and Juliet by Craig Waldron (2007) Mozart, l'opéra rock (2009), a Dove Attia and Albert Cohen production, in which pop-rock fragments are mixed with original pieces by the great composer. The line between opera and musical in this case is blurred, and I think that the amplitude of the classical opera shows the difference. If we look at it this way, the Vivaldi - The Fifth Season (premiered in 2017) show, which we recently saw on the Volksoper stage in Vienna, deserves the name a "BaRock opera".

Inspired by the Four Seasons masterpiece (1723) by Antonio Vivaldi - a popular piece in symphonic concerts nowadays - as well as by the eccentric personality of the Italian composer (1678-1741), composer Christian Kolonovits wrote a contemporary opera using Angelika Messner's libretto, in which there are five members of a rock band with electronic instruments accompanied by a large symphonic orchestra. The combination of sounds is interesting and surprising. Very fitting for Vivaldi's personality, whom some consider to be the first "superstar" ever in the history of entertainment music. The hectic lifestyle, the nonconformity, the eccentricity, the defiance of custom, countless affairs, the amazing talent as a performer and composer, his spectacular success with the public (at least for some time), give Antonio Vivaldi this status. His legacy is priceless.

The story follows the composer's life, where every event or situation comes with spectacular music.

In the famous Karlsplatz in Vienna, Clara, Loni, Cati and Toni, who form a rock band called Vivaldi, come to the city to look for the last scores written by their idol. But even though Vienna is the city where Vivaldi drew his last breath, the only thing left of him is a plate on a building. The girls find nothing but the diary of Paolina Girò, who accompanied the composer on his last trip to Vienna. Reading this diary, they enter another world...

Venice, 1740. Vivaldi is old and sick. He hasn't written anything in months. The public forgot about him, and his beloved soprano Annina, Paolina's sister, left him too. He has one last chance: to go to Vienna and present the emperor with a new masterpiece. What should the theme be? His own life. He will tell his friend, the playwright Carlo Goldoni, his story, and he will transform it into a libretto for an opera.

The story begins with Spring - Vivaldi's childhood in his parents' house, the meeting with cardinal Ruffo, who, amazed by the boy's talent, wants to prepare him for a career as a priest; the crazy life of the future priest, beloved violinist, devoted to nightlife and casinos. Then, his meeting with the Hospedale Pieta orphan girls' orchestra, the ordination of the red priest (the infamous colour of his hair) and his ability to escape the hardships of a priest's life by claiming he's allergic to the smell of candles and incense.

Summer. Vivaldi is now a teacher and a conductor of the Pieta orphanage orchestra for girls. They are practicing his latest piece when the two Girò sisters, Annina and Paolina, come in. Annina is wearing a lot of makeup and acting like an eccentric, hysterical diva. They want to study under Vivaldi. The musician explains that makeup and games have nothing to do with being a real artist. So no wigs or pompous, loud clothes. Annina understands. She gets the lead role in Vivaldi's new opera. She has a beautiful voice, good technique and an emotional performance. It's a huge success. The emperor from Vienna invites the composer to write him an opera, but asks, until then, to receive a strand of his red hair. The cardinal Ruffo is disappointed with his protégé, who isn't behaving as it is fit for a priest.

Autumn. The Church takes revenge for Vivaldi's mistakes. Paolina tells him to try his luck in Rome, but Rome is the city of emasculated singers and Annina has no chance there. Moreover, in order to move his orchestra of girls to Rome he needs the approval of the cardinal, who is completely against it. Another important man of the Church, the cardinal Ottoboni, offers his own castle to organize a concert. He also suggests a vocal competition between the soprano Annina and the famous castrato Caffarelli. Vivaldi accepts, but Annina feels betrayed and belittled - I am an artist, not a horse from the circus!

Winter. We are in Vienna where an old, sick and poor Vivaldi is working on his new opera, but all his hopes are ruined when he hears about the death of the emperor. A year later, in 1741, he himself dies.

Epilogue. In the heart of Vienna, in the famous Karlsplatz, the girls read the last pages of the diary. When they finish reading, they come to understand that other than the beloved, famous four concertos in the Four Seasons, there's also a fifth season for Vivaldi, that of his legacy left for future generations. Through this fifth season, his compositions became immortal.

The story explains the countless opportunities that composer Christian Kolonovits has to emphasize his idea - the mix between classical sound and pop-rock. We talked about the orchestra, let's talk about the singers. The American megastar Drew Sarich was chosen for the leading role. Among his internationally successful roles: Judas in the Jesus Christ Superstar musical, Quasimodo in The Hunchback of Notre-Dame musical (with almost 600 performances in Berlin!) and the leading role in Dracula, the Musical. He is also one of Liza Minelli's backup singers! Drew Sarich, as Vivaldi, was just as successful, his impressive voice in the spectacular pop-rock style, his tall figure moves freely and naturally, wearing the clergy's cassock...the singer-actor's performance in this complicated play is elegant. Around him are the soloists, the choir and the Volksoper ballet troupe from Vienna, who attempt, and usually succeed, to give a voice and life to extraordinary characters and situations. Director Robert Meyer requires a lot from the actors, the scenic backdrops (Christof Cremer) aid them - the elements of the baroque stage are intelligently and effectively used in this show. The costumes (Christof Cremer) and especially the wigs, reminiscent of the movie Amadeus, bring us back into the past. The talented singers attempt to mix the sound of classical opera with the sound of rock music. The only (unfortunately!) countertenor (Thomas Lichtenecker) aria makes for an original and spectacular addition to the score. The costume and the wig makes one think about the Farinelli movie this time! soprano Rebecca Nelsen's performance as Annina Girò is remarkable. I have only positive remarks on the cast of the show, as well as the Volksoper orchestra who succeeded in this difficult endeavour.

The score won some important prizes: Christian Kolonovits was named the best composer and the best arranger at the German Musical Theatre Prize (Deutschen Musical Theater Preis). During the same competition, Drew Sarich's performance as Antonio Vivaldi won him the prize for best actor in a leading role. Now you understand why we recommend to go see Vivaldi - The Fifth Season or The New Life of Old Vivaldi at Volksoper, if you happen to be in Vienna.

Vivaldi - The Fifth Season or The New Life of Old Vivaldi