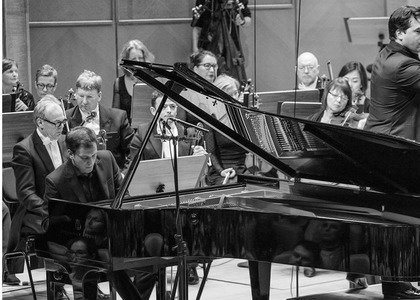 RADIRO Festival – Day 3. MDR Orchestra from Leipzig and Mihai Ritivoiu – on the stage of RadiRo Festival

Concerto No.3 for Piano and Orchestra by Serghei Prokofiev opened the third RADIRO evening. Under the baton of Robert Trevino, one of the most appreciated young American conductors of our time, the German Radio Symphony Orchestra from Leipzig, the oldest in the world, returned to the stage of Sala Radio. Mihai Ritivoiu, laureate of the International Contest George Enescu played the piano. He also performed an encore for the audience, Sonata No. 247 by Domenico Scarlatti.

΄Very talented. He seemed to move so smoothly and everything seemed so simple.΄

΄I was absorbed and we really liked it very much.΄

΄It's been ten years since the last time I was at Sala Radio; the performance was incredible, outstanding!΄

΄The programme was the first thing that attracted me, but also the orchestra.΄

΄The idea of Leipzig Orchestra, Strauss, is splendid. It really is splendid. The concert, as well as the festival, was great. Just great.΄

In the second part of the night, The German Radio Symphony Orchestra from Leipzig performed the Symphonic Poem A Hero's Life by Richard Strauss. At the end of the concert and before the encore from the Lohengrin opera by Wagner, conductor Robert Trevino addressed the audience with a few words:

'Music is so important for our society, for education, for mind and for soul. Never forget that.'