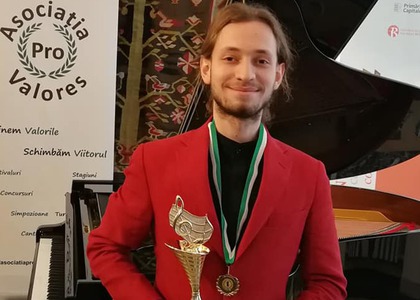 Nil Mladin, winner of the Dan Mizrahi trophy at the 10th edition of “The Road to Fame” competition

The 10th edition of "The Road to Fame" competition took place on October 26th and 27th within the fairytale background of the Mogoșoaia Palace, build in the Brâncovenesc style.

Young artists from Kazakhstan, Republic of Moldova, and Romania had diverse and spectacular performances, astonishing the crowd and the jury made up of pianists Dr. Ilinca Dumitrescu, Mădălina Pașol, composer Diana Gheorghiu, representative of UCIMR (Romanian Musicians' Performative Compositions Union), and Sebastian Crăciun, president of the Pro Valores Association.

Dozens of young pianists, professional or fans of the instrument, offered a competition at a high artistic level, an unforgettable musical marathon, after which they were rewarded with numerous prizes from the UCIMR, Samsung, Glove Technology Romania, Orange, Fairvalue Consulting, the Federation of the Jewish Communities in Romania, HEIDI CHOCOLAT, the Art Institute, Senia Music, Royal Art Mogoșoaia, the Brâncovenesc Palaces Heritage Centre, and Radio România Cultural.

The trophy, which this year was named after pianist Dan Mizrahi, was won by Nil Mladin.

He graduated from George Enescu National College in Bucharest. At age 6 he began his piano studies at the Iosif Sava Musical School in Bucharest under Prof. Viorica Nistoroiu, and in the fifth grade he transferred to the George Enescu National College, where he continued his studies with the same professor. Since September 2018, he had been studying piano in professor Joanna MacGregor's class at the Royal Academy of Music in London after he was accepted on a full scholarship. The young pianist is a laureate, winning first place at national and international competitions: the "National Musical Competition" (2017), the "Victor Giuleanu" National Competition, the "Irina Satchi" Competition (the Cesar Franck prize) (2016), the "Tudor Dumitrescu" International Competition (2016), the "Millenium Piano" International Competition, the "Gradus ad Parnassum" National Competition, and the "Pro Piano" International Competition. He attended mastery classes with major pianists such as Rustem Hayroudinoff, Leon McCawley, Martin Hughes, Gordon Fergus-Thompson, Tessa Nicholson, William Fong, Daniel Goiţi, Imre Rohmann, Florian Mitrea, Adrian Suciu, Cordelia Höfer Teutsch, Maria Masycheva, Georgy Gromov, Håkon Austbø, and Stefan Arnold. He also performed together with the "Ion Dumitrescu" Philharmonic Orchestra from Râmnicul Valcea, and with the George Enescu National MusicCollege Orchestra. Among the important performances of the young pianist there are other worth mentioning, such as the performance at the George Enescu Museum, the George Enescu Hall of the National University of Music in Bucharest, the Niculescu Studio in Berlin, the Romanian Cultural Institute in Vienna, and also his performances in France, in Corrèze, Monedieres, and Paris.

Aside from the important cash and goods prizes, Nil Mladin was granted with a concert together with the Radio Chamber Orchestra (May 6th 2020), a concert with the "Ion Dumitrescu" Philharmonic Orchestra from Râmnicul Valcea as part of the "Young Talents" Festival, a national tour of recitals called "Citadele muzicale", and at the UCIMR's invitation, he will be part of the 16th edition of the International Competition in Tokyo, in August 2020, held by the Romanian Music Society which is led by Mrs. Kazuko Shimada.