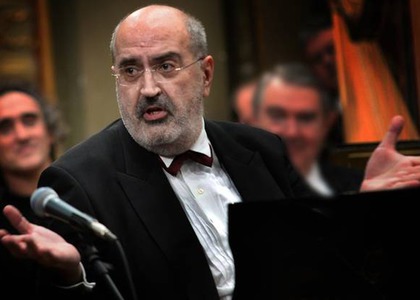 The public present at Elvira Popescu hall on 2nd December 2019 witnessed the musical dialogues between the France's Ambassador to Romania, Mrs. Michèle Ramisthe master Dan Grigore. The event took place one year after the launch of the Romania-France Season, whose purpose was to celebrate the cultural values as well as the friendship between the two states.

In the first part of the recital, pianist Dan Grigore performed Adagio from Suite No.1 op.3,In the old style by George Enescu, followed by four preludes and the waltz La plus que lente by Claude Debussy. The French Ambassador to Romania, Mrs. Michèle Ramis, joined Dan Grigore in approaching selections from the piano Dolly Suite for four hands by Gabriel Fauré and from the Ma mèrel'Oye Suite for two pianos by Maurice Ravel, and in the end, they offered as bis Vocaliza by Sergei Rahmaninov.

After the event, the two protagonists shared some thoughts about these musical dialogues:

"What I felt during this event was the vibration of the audience, the joy, the excitement of seeing a great musician, like Dan Grigore, performing along an ambassador. I think the people felt the idea of friendship and they vibrated, because it wasn't just a musical event, but an almost political one, I would say. For me, it was something exceptional, lived with intensity and I think it was important for the Romanian-French friendship." - The French Ambassador Michèle Ramis.

"I am very pleased. I have always been convinced that there is a playful quota in music, as in other arts, and that even the most serious jobs can be done very well and much better if you find the playful quota of them, so the playful quota also means finding the vegetation of the soul which gives a certain spontaneous creative force. Well, this can happen when the two are modest, humble in front of the music, and when they find the pleasure of dilettantes, as I said before, to venture together to this blue of the sky and, as the poet says, beyond it."