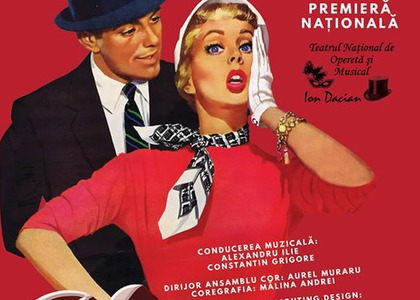 Kiss me, Kate` or Yes, it's possible!

Yes, it's possible. It is possible that a group dumped on the streets, drifting here and there with no shelter, insisting to live in conditions where it would have been easier to die, reborn, practically, from its own feathers. For countless years, the once treasured artists of the Bucharest `s Operetta and Musical Theatre had been forced to live in neighbourhoods, to sing wherever they could, they were forgotten by those who once applauded them, and they remained unknown for the young generations, even to lose their identity. They were about to lose their identity once integrated in the National Theater of Bucharest. So many. Too many! Here`s that The National Operetta and Musical Theatre `Ion Dacian` exists again from not too long ago. It was reestablished and, for over a year, the famous soprano Bianca Ionescu has been its manager. It is hard to start from scratch, especially these days, when cultural institutions have a hard time, sometimes a very hard time...unimaginably hard, when artist are asked the moon in the sky but in the winter, the theater barely pays for heat and electricity. Operetta and musical means luxury, exuberance, glow, vocal and theatrical virtuosity. The repertoire is amazing, the music and the story are built so as to easily reach the public, to delight them, to draw them out of the everyday life and to make their lives more colorful.

The Bucharest`s Operetta, the only theater of profile with the national status in our country, once had a huge repertoire from which the masterpieces in which the genre abounds were not lacking: Silvia, The Princess of the Circus, The Bird Seller, The King of the Gypsies, The Merry Widow, The Bat...Fewer and fewer people remember with nostalgia the wonderful performances; more and more people have nothing to remember. But here, the Operetta has a new house, the operetta is reborn and, trying to keep up with the times, it has made a generous place in her yard, for the musical. It timidly entered the Romanian scenes, with baby steps. I remember the brilliant Chicago show made by a foreign company with Romanian artists. Thrilling! Huge prices! Between that Chicago (2005) and Mamma Mia or We Will Rock You playing today on the Palace`s Hall stage have passed… 15 years! But this is what a show is - an event, with an ephemeral life, that belongs to no one. Gradually, the theaters began to approach the musical - and Răzvan Mazilu played an essential role in this process - Cabaret (German State Theater, Timisoara, 2014), West Side Story (National Theater Festival), UNITER, Odeon Theater , 2014), The Jungle Book (German Theater Timișoara, 2017), The Sound of Music (Comic Opera for Children, 2018), The Addams Family (Excelsior Theater, Bucharest, 2019) ... and it is rumored that Odeon is now preparing Cabaret. At The National University of Theater and Film I saw a few musicals - unfortunately, at this moment I can only remember an ambitious `Jesus Christ, Superstar` made in 2006 by Adrian Pintea and his student actors (I know, it's a rock opera but ... it is still a theater production with music!) and a sparkling `The two orphans`which are about the same age. I would not like to forget the spectacular performance of the students from the `Tudor Vianu` National College who have been performing in musicals for years, led by Professor Marcel Homorodean, and the repertoire covers a wide palette between `Chirițe` and `The Hunchback of Notre-Dame`

or `The Phantom of the Opera`. Of course, I do not miss the fantastic show `Romeo and Juliet` made in 2009, held right on the stage of the Bucharest Opera, accomplished in collaboration with the Budapest Opera and Musical Theater, or the beautiful show with ` The Opera Ghost`, presented in 2015, right on the stage of the new Opera House. Without the claim of completeness of this enumeration, I conclude, however, that we can start to talk about a tradition of musical in Romania. The information at hand as well as the access to productions from around the world impose -no matter if we want it or not- the comparison, implicitly the competition. Romanian artists don't have yet a good musical school in their country, therefore each one make his own way. Opera singers must give spoken theater replies, theater actors must sing and all, singers and actors, must dance. Some are successful, but others... But the challanges are coming more often and they are becoming more and more ambitious. The times and the public demand it! It is certainly easier when, for a project, the director can choose the interpreters from hundreds of aspirants. It is much more difficult when a band like the Bucharest Operetta` one intends to perform such a show with many of its own employees and some collaborators. The effort is much greater and the success - because in the case of the most recent musical production of the Bucharest Opera, we are surely talking about success - more precious and worthy of sincere praise.

`Kiss me Kate`, Cole Porter's famous musical, not only didn't it inhibit Romanian artists, but even more, this reference work in the genre repertoire, with constant success throughout the world since its 1948 premiere, it managed to deliver to each performer a unique opportunity to give his utmost on the stage . I understand that there are three distributions. I saw the preview on the evening of 12th December and I will comment on this. With few exceptions, only good.

`Kiss me Kate` is found in the category of musicals - a standard that, for guidance, imposes certain fixed models, however, leaving the artists of each theater to make their own adaptations. The version played on the stage of the National Opera Theater "Ion Dacian" in Bucharest bears - for stage adaptation, artistic direction, stage design and light design - the signature of Cătălin Ionescu Arbore. Original, spectacular and effective, the idea of ​​the shiny capital letters that show on the stage the title of the work and which make an easy to handle decoration. The stage adaptation retains much of the pattern - from what I saw on youtube, the BBC Proms 2015 show - both in the group movement and in the movement and interpretation of the characters. The costumes all bear the mark of the creator; they are colorful, stylized, bright, extremely decorative and yet functional, with one exception: the opulent blue dress, in layers, resembling a huge oblique umbrella, with shorter face and longer back, with which Lili Vanessi enters the stage for the first time. I can accept this dress as an art object, exposed on a dummy. Unfortunately, she does not do any service - on the contrary - to the one who wears it. It is my opinion and I assume it. Another opinion that I assume is that it is required a careful review of the translation / adaptation of the libretto and the texts in favor of a language with a vocabulary closer to literature than colloquial expression, not very elegant. For example, here is a diamond, the best lubricant!).

Speaking of performers, contrary to the custom of placing soloists in front of ensembles, I would like to start with an enthusiast `Bravo` addressed to the choir and ballet members. The `Kiss me Kate` sheet music is extremely demanding, even merciless with them. The choristes are asked to sing, dance, perform solo performances, fill the stage with movement, take attitudes in context, so be unique characters with a precise outlined role. And the requirements were met. With considerable effort, I suppose, doubled or better said supported by an ambition and - I repeat - a desire for life, fully motivating and uplifting. I do not know exactly which ballerinas are the employees of the theater - although, I can suppose - and who are collaborators. They all tried to be as good in the classical ballet as well as in doing acrobatic figures, even street dance. Of course that for the step, permanent collaborators of the theater were involved - here I refer with pleasure to Adrian Nor, delightful and conqueror as actor, dancer and singer as usual. Standing by him - also a graduate of UNTC, an actor efficiently supplemented with musical studies, now a full member of the Operetta ensemble - Victor Bucur, with his romantic aura of young lover, blond and dreamer, for which the expression through movement / dance has become as natural as that of speech or song.

The two feminine roles Lilli Vanessi / Katarina and Lois Lane / Bianca found in Rodica Stefan and Mediana Vlad, the first, collaborator, second, member of The Bucharest Operetta Collective, ideal interpreters to whom nothing can be reproached. On the contrary, perfectly folded to the characters they perform on stage and off stage - remember that the musical `Kiss me Kate` uses the formula theater in theater, the action sliding slightly between the backdrops and booths of the actors who then, in the light of the spotlight, transforms, under our eyes, into the characters of Shakespeare's comedy. A soubrette with Viennese experience (Adela from Johann Strauss`s `Bat`, and that is not the only), a coloratura soprano with a debut on American scenes in `The Queen of the Night` from `The Magic Flute` by Mozart, Mediana Vlad has voice, stage presence, casualness, ability to dance, the humor needed for the situation comic ... and all that would be needed for her role in `Kiss me Kate`. You listen to her and you feel as if on her tongue were the bubbly bubbles of a glass of champagne! It is a pleasure and a delight to follow her in all the intricacies of the action. The choice of Victor Bucur being his main partner was correct and inspired.

From the information I have, soprano Rodica Stefan is more inclined to the opera scene. In the operetta, she approached Rosalinda from `The Bat` and Hanna Glavary from `The Merry Widow`. But, after seeing her in the musical, I can say that this genre fits her perfectly. The voice is full, soft, easily modeled in any register. When she is Lili Vanessi, the soprano is restrained, elegant, sensitive, excited and emotional, however, without avoiding the unstoppable explosions when she is deceived and lied to. She doesn't lack humor either! When she plays Kate, it is as if the whole being of the performer changes and Rodica Stefan becomes an obstinate shrew that no one can control. Scratches, screams, bites, spits, scratches ... and does it masterfully! With nothing less than any model on an international music scene.

Fred Graham / Petruchio was cast as Stefan Popov. I watched him and often applauded him, in the good times of the Bucharest Opera, in many roles in the classical repertoire. It is a pleasant scenic presence but, in this context, slightly anachronistic. The voice doesn't help him anymore. Surrounded by young people, the artist endeavors to cope with them, but, I think, the mannerism and the too-serious, affected approach of the role rose for him some insurmountable obstacles . I am sure that, overtime, and after he accommodates to the role, the beloved performer of so many roles in classical operettas, will find the formula in which nature takes the place of gestures, in this play being too much studied and sought after.

The distribution of the show is very large. Again, everyone did their best. What I enjoy is the fact that, throughout the play, the balance has never tilted towards lack of taste. The opportunities would have been enough. Under the safe hand of conductor Alexandru Ilie, the show offers for 4 hours (so far too much, but time can be considerably shortened by a more alert conduct of the spoken dialogues and by giving up the applause that the audience traditionally offer with generosity) a lively, bright and colorful fireworks display. And the involuntary smile at the first plucks disappears only late, at night, when the show become a beautiful memory of a joy you want to experience again.

Technician 3 / Gregory / The driver of the general - George Matei