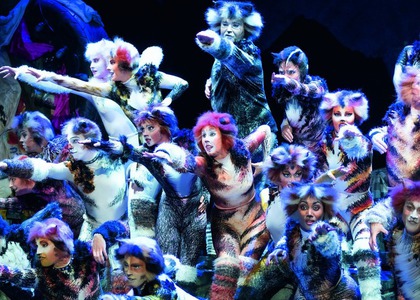 Today I've checked the theater`s website ; until 3rd May, 2020, almost all the tickets for the Cats shows - which will be held six days a week, except Monday, and two shows on Saturday, one of them in the morning! - are sold out. Only here and there you can find a free seat. A fulminating success! A flawless blockbuster! The score is surrounded by an aura of legend.

Often referred to as the most successful musical of all time, in 1983 Cats won seven `Tony` Awards - for the best musical, the best script, the best music, the best direction, the best lighting, the best costumes and, for Betty Buckley- playing Grizabella- the best actress; three `Olivier` Awards, three `Drama Desk` Awards, and one `Evening Standard` Award - among many others. So far, the show has been watched by over 73 million people and the number is increasing day by day. Cats has been presented in 30 countries with the text translated into 16 languages. And, from December 2019, an artistic feature film will present Cats on the big screen, also in Romania. A genuine pearl, I have just saw it! Tom Hooper (The King's Speech, Les Miserables, The Danish Girl), an Oscar-winning director, turns Andrew Lloyd Webber's musical into an unprecedented cinematic event. In the cast, James Corden, Judi Dench, Jason Derulo, Idris Elba, Jennifer Hudson, Ian McKellen, Taylor Swift, Rebel Wilson and Francesca Hayward, first ballerina at the British Royal Ballet; spectacular scenery, last minute technology and dance styles ranging from classical to contemporary ballet, from hip-hop to jazz, from street dance to step.

The idea of the musical Cats was born from the desire of the composer Andrew Lloyd Webber to write, in 1977, a book of songs inspired by the collection of poems with and about cats composed in 1939 by T.S. Eliot. Over the years, this cycle of short vocal pieces had been developing and it reached the dimensions of a two and a half hour musical with spectacular success (1980). In London, the production was played for 21 years, meaning almost 9000 performances. Cats remained on Broadway for 18 years (nearly 7500 performances). The musical was also played on lyrical theater stages - at the Operettenhaus in Hamburg it remained for 15 years on posters (6100 performances) and in Japan, a stage was built especially for Cats where, since 1983, there have been over 10,000 performances, and the show continues to attract public attention.

Thirty-six years ago, Cats was presented in Vienna with the libretto translated into German. The title remained in the repertoire for seven seasons.

Since July 2019 the rehearsals for the new Cats production have started on stage of the Ronacher Theater in Vienna. The team gathered around the director Trevor Nunn, the one who signed the direction at the opening night in London, and around the artistic coordinator and choreographer Chrissie Cartwright, who also linked her name to Cats and to the stage version in which this musical should be presented in the whole world - because Cats has an image to keep, wherever it would be played. The makeup, the costumes, the ballet scenes, the movement are - with very few exceptions - permanently fixed and they allow only very small changes, objectively imposed by the personality of the performers. The opening night - in fact, the resumption of the show - from Vienna took place on 20th September, 2019. With a resounding success as a splendid score impeccably interpreted deserves.

All the characters are cats that form the Jellicles tribe. They are called Felines. They meet on a special night to decide which of them will have access to the Heaviside Layer (Cats` Paradise) and then return to Earth again. As it is well known that cats have nine lives! Those who wish to obtain this favor must appear in front of all and plead for their cause with a .... song about their life.

The music sounds fascinating. Carsten Paap conducts the largest orchestra - 27 people with instruments amplified by sophisticated, last generation electronic equipment - that has ever been heard in a Cats show. On stage, cats` costumes and makeup can only arouse excitement and enthusiasm.

The production team is huge, on the scenes and behind the scenes. Only the cats exceed the number of… .50! Their names are: Deuteronimus, Munkustrap, Rum Tum Tugger, Grizabella, Gus, Demeter, Bombalurina, Jellylorum, Jenny, Skimbleshanks, Macavity, Mungojerri, Rumpleteazer, Jemima, Victoria, Mr. Mistoffelees, Electra, Coricopat, Tantomile, Cassandra, Alonzo ... TS Eliott's poetry is colorful, tender, sentimental, admiring, humorous .... It talks about a cats` world - black cats, gray, white, red, striped, with bow-ties or white boots, young cats, old cats, lazy felines, careless, grumpy, nervous, unhappy, revengeful, cute, dreamy, false, faithful, cunning - which, in the end, they turn to be - says the poet - very similar to the people`s world. Most dancers can dance, I'm sure of it, in Swan Lake. Their technique is amazing, the grace conquering, the resemblance to the incarnate animal, perfect; the harmony of the whole, the small force and the small explosions of cat personality ... delightful. Although, as one interpreter confessed in a broadcasted interview - it is hard to be a cat eight times a week. The audience applauds frantically after each issue. I applauded it too. I'm not trying to describe the show in words. I'm trying try to urge you to see it - and live it! - Cats on the Ronacher stage; is a show for which it is worthwhile to take a trip to Vienna. Even just to see it.

The text - based on the poems in the volume "Old Possum's Book of Practical Cats" by T.S. Eliot