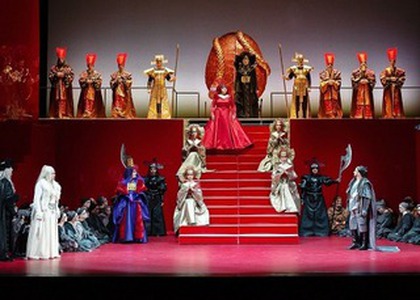 The opening of the Turandot de Puccini opera at the Bucharest National Opera House. An ordinary performance

A completely blank background, red, shiny side walls, a red ladder coming out of a central cubical object, a walkway confined by some useless metallic bars and a gong with Chinese drawings placed in the center. This was pretty much the view when the curtains opened in the evening of February 16, 2020 on the third performance of Turandot.

The director, Mario de Carlo, explains within the program that the essence of his vision has been clarity, with a touch of modern sensitivity, but in the same time, in an Italian manner. Therefore, the geometry and the abstractness of the sharp forms must be completed with the storyline and the music drama. While the scenery doesn't suggest anything related to the fairytale land from Carlo Gozzi's story and the light changes are far too delicate for highlighting conflicts or spiritual states, the costumes are colorful and striking, but only for the Turandot's suite, from the four ladies, the three ministers and the entire cohort of executioners. The crowd of ordinary people wears shabby, grey clothes, a blunt color which is also found on the costumes of Calaf and Timur. You wonder how, in all that massive grey, Liu the slave is terrible white, from her silver wig to her shoes?... From what I figured from the sublayers of the storyline, she is a Nordic princess, who became a slave, thus the dignity and the sense of sacrifice that she displays, in the name of love. Mario de Carlo has also provided her with an outstanding power of prediction, because on the last question when Calaf hesitates, Liu is the one to draw the attention towards the princess. Otherwise, I don't think there are any other stylistic elements which belong to the scenic conception besides the detail of the 'egg-throne' (suggesting the shell that covers the 'ice nymph' until she breaks it out of too much love) and the introduction of some ballet scenes (warriors or worm-people) at times where Puccini's narrative wasn't calling for such a thing (choreography by Corina Dumitrescu) and also of some abrupt, mechanical moves of a puppet made by the choir and the three ministers. The performance could have done better without the shiny confetti from the end and the firecrackers in audience. It resembled the festive celebrations from other halls in the country.

As for the singing, it was the usual thing, loud and strong. The choir (trained by Daniel Jinga) sounded forcefully, quite homogenous, but, nevertheless, it was far from what it used to be. The score, so rich in brass excesses and overall force, designed by the composer himself, has been a… fortunate opportunity for the orchestra to take no prisoners and simply take the soloists and the audience's ears by storm. Not even the exigency and the reputation of a conductor such as Tiberiu Soare couldn't stop it anymore. There were also disparities (especially on the scene of the Ping, Pang, Pong), as well as way too large tempos on the arias of the soprano and the tenor from the first act and also on the entire scene of Liu's 'death'. Dragana Radakovic, who played the main part and the guest of our first lyric scene, made a great impression. The high notes were on place, sometimes rendered more openly than roundly, but still sonorous and well-intended. The attention placed on the high notes rather shadowed the richness of the medium and low part. Anyway, on the 'questions' scene, she owned the victory, because the tenor Daniel Magdal couldn't catch a break. He was left only with bits of metallic sparkles to conquer his fans. Not even the well-known 'Nessun dorm', where he had little competition, managed to express the enthusiasm form the past. With an extreme care for the beauty of the singing, in which she paid attention to every phrasing detail, Irina Iordăchescu has given us a delicate, introvert slave Liu, who was more a of a princess than a sentimental woman in love and a rival to princess Turandot.

The guest Dragoljub Bajic had nothing from the personality we were used to from Timur, starting from his baritone voice to the scenic force and mobility. He was in a total contradiction with the composer's notes related to this character, pictured as a blind, incapable bass, depending on Liu.

The three ministers sounded different from one another, as one was too much and the others too little. They didn't convince us that they were fully involved with the spirit of the score and their scene had the most inaccuracies: Dan Indricău, Liviu Indricău, Andrei Lazăr. We were also expecting more from Ion Dimieru (The mandarin). However, we appreciated Valentin Racoveanu (The Emperor Altoum) and the two maids of Princess Turandot: Ana Maria Hangu and Oana Ștefania Ionescu.

Using the 3 answers from the 'questions' scene, I advise you to abandon any HOPE, THE BLOOD won't rush through your veins watching this production of the TURANDOT!... It is an ordinary performance.