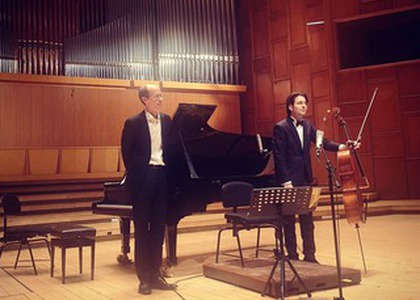 The recital of the cellist Valentin Răduțiu at Sala Radio, within the series "The Successors of Musical Romania"

On Wednesday, March 4, 2020, on the stage of Sala Radio, a new recital of the series "The Successors of Musical Romania" took place. This time the protagonists were the German cellist of Romanian origin Valentin Răduțiu, accompanied by the Swedish pianist Per Rundberg. More details about the recital and about the project " The Successors of Musical Romania" are from the following report by Maria Isabela Nica:

For almost two years, the project The Successors of Musical Romania organized by Radio Romania Musical and the Rotary Club Pipera aims to promote the young musicians of Romania, already confirmed through the activity on big international scenes, bringing them on the Radio Room stage in one hour recitals, with programs. accessible. The aim of the project was successfully achieved and yesterday evening, March 4, 2020, when the Bucharest public enjoyed the outstanding quality of the interpretation of the protagonist musicians, the cellist Valentin Răduțiu and the pianist Per Rundberg, with whom he has a beautiful musical friendship since the studies at the University Mozarteum in Salzburg.

The brilliant technique and musicality were very well emphasized through the chosen repertoire, Sonata Op. 19 in minor soil by Sergei Rachmaninoff, Variations on a Theme by Rossini by Bohuslav Martinu and a transcription of the lied "Languir me fais" from the cycle of the "Seven songs on poems by Clément Marot" by George Enescu. The two musicians managed a constant communication and a deep experience of the musical text, offering the audience original interpretations, each work being rewarded with numerous rows of applause. The recital ended with three visas: the works "Menestrel" by Claude Debussy, "In the style of Albeniz" by Rodion Shchedrin and a transcription of the lied "Abendlied Op. 85" for Cello and Piano by Robert Schumann.

Among the spectators gathered at Sala Radio I also met the composer Dan Dediu: "It seemed to me both deeply what they sang, how they sang, of a high nobility, elegance. In the Sonata of Rahmaninov I did not know what to admire anymore a lot - the technique, the virtuosity, the pleasure of making chamber music, the intense pianissimes ... but, of course, also the support of the formal conception. I can say that it seemed to me in the end that, indeed, all the interpretive conception of Răduțiu and of Per Rundberg derives from a very conscious decision to sing Rachmaninoff on the horizon of the serenade and not on the horizon of romance, as Rachmaninoff usually sang and that I liked very much, he ennobled this music and he continued to prove that I am internationally renowned performers, I could say, internationally. Both Bohuslav Martinu's Variations on a Theme by Rossini, a parody piece in the background and they decrypted it in this key, as well as Enescu - "Languir me fais", a formidable lied of the seven songs on Clement Marot, realized with simplicity and, at the same time, with a great depth of spirit. "

Finally, in the foyer of the Radio Room, the cellist Valentin Răduțiu offered autographs on the album "Vara magică", which appeared at the end of last year at the Casa Radio Publishing House. It is also worth mentioning that together with Valentin Răduțiu and Per Rundberg, they managed to record several discs, including the one with the integral of the cello and piano by George Enescu.

Present at every event in the series "The Successors of Musical Romania", Dan Popescu, president of Rotary Club Pipera, spoke to us with delight about the recital on the evening of March 4: "A German national of Romanian origin who, as far as I understand, feels maybe more Romanian than some of us and he gave a phenomenal recital, an exceptional performer that we had the surprise and pleasure to see in Bucharest for the first time. And what was exceptional, was the public reaction. The chemestry between the two people - the pianist and Valentin Răduțiu - it was phenomenal, like a dream I felt - I hope, or I think - in the minds of the performers, to sing in Romania ... especially Valentin Răduțiu, for the first time I understand in - a concert in Romania, at Sala Radio.