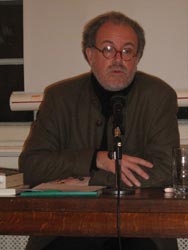 Amaury du Closel and the Silenced Voices of the 3rd Reich

Friday, 23 January 2009 , ora 12.30
On January 27th, the entire world commemorates the victims of the Holocaust. For this reason, the Cultural French Institute in Bucharest, in collaboration with the Jewish National Theatre and the George Enescu Philharmonic Orchestra, organised a series of cultural events, between January 23rd and 31st, which offered music, imagery and words as 'weapons against oblivion'. The conference called The Silenced Voices of the 3rd Reich, held on January 26th at the French Institute in Bucharest by French conductor Amaury du Closel, discussed the issue of European composers which became victims of the Nazis. The speech was based on the homonymous book, written by Amaury du Closel. The conference represented the author's way of paying homage to 'forgotten' composers, such as Viktor Ullmann, Ernst Toch and Alfred Tokayer (who was born in Romania). Among the subjects the author chose to approach were related to Nazi ideology and politics, and the way they were reflected in culture and in music; the tragic destiny of these composers; even jazz music, which was forbidden in the 1940s, as 'degenerated music'. On Wednesday, January 28th, Amaury du Closel will conduct the Radio Chamber Orchestra; on Saturday, January 31st, he will conduct the Silenced Voices ensemble, in a concert dedicated to the victims of Nazism.

Amaury du Closel: 'I got the idea for this conference during the preparations for the concert I was going to have on January 28th at the Romanian Radio Broadcasting Company accompanied by the Radio Chamber Orchestra. The French Institute, co-organizer of the concert that will take place on January 31st at the Romanian Athenaeum, made the most of my presence in Bucharest, and invited me to this conference. It is, if you will, a way of promoting the meaning of music through words. Music itself is wonderful, it is perfect, but we should talk about it some more, before we start playing. There are many composers whose work is not interpreted. Music needs a revival.'
Alexandra Cebuc
Translated by Laura-Cristina Badea
MA Student, MTTLC, Bucharest University
Return to archived Books about music