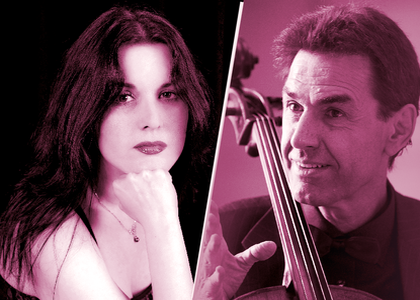 Radio Romania Music, the Austrian Cultural Forum and the Cotroceni National Museum will organize Wednesday, January the 17th 2018, starting from 19.00, the extraordinary concert Musical bridges - bridges between past and present, bridges between cultures, a concert under the sign of the Great Union Centenary and National Culture Day, celebrated on January the 15th.

Romanian pianist
Raluca Știrbăț and Austrian cellist Rudolf Leopold will perform in Bucharest, for the first time, a sonata by Constantin Silvestri, whose score was thought lost: the Sonata op. 22 no. 1 for cello (bassoon) and piano. It was performed only once, at the first audition in 1941, as the score was lost until 2017, when it was found again by Raluca Știrbățin Vienna as a result of thorough research.

The discovery has a special importance: Constantin Silvestri (1913-1969) was one of the great Romanian conductors of the 20th century, earning international recognition. He was also a very talented composer, one of the most important who were active before and after the Second World War. However, Constantin Silvestri's list of works is quite small, partly due to the composer's strictness with himself. Silvestri composed the Sonata op. 22 no. 1 in July 1941 in celebration of composer Mihail Jora's 50th birthday (Jora was Silvestri's professor of composition). The anniversary concert took place on November the 8th 1941 in the Orpheus Hall (ex-Jean Feder) in Bucharest. The Sonata was thus heard for the first time (arranged for bassoon and piano, with Dumitru Alexandrescu playing the bassoon and the composer himself playing the piano, followed by only a second audition, on February 27th 1942, arranged for cello and piano, with Ion Fotino playing the cello and Constantin Silvestri on the piano).

In the recital at the Cotroceni National Museum, pianist Raluca Știrbățwill perform two other works for piano solo by Constantin Silvestri: Concerto piece op. 25 no. 3 (1944) and Bacchanalia (1933), as well as the Sonata op. 1 in B minor by Alban Berg. Alongside the Sonata op. 22 no. 1 by Silvestri, cellist Rudolf Leopold and pianist Raluca Știrbățwill also perform the Sonata no. 1 op. 38 in E minor by Johannes Brahms, the Nocturna and Saltarello by George Enescu and Six Romanian Dances by Bela Bartok.

Musical bridges - building bridges between past and present by bringing a valuable work in the current concert repertoire. But also building musical bridges between the Romanian and Austrian cultures, through the presence of pianist Raluca Știrbăț- a Romanian who lives in Vienna - and of Austrian cellist Rudolf Leopold, but also through Constantin Silvestri himself, whose father was an Austrian; and also through the fact that the Sonata op. 22 no. 1, after eight decades of wandering, filled the Konzerthaus in Vienna on November 10th 2017 for the first time, in a concert organized by the "George Enescu" International Society in Vienna, the Romanian Cultural Institute and the Austrian-Romanian Society.

The extraordinary concert on January 17th 2018 is financed by the Austrian Cultural Forum and will be recorded by Radio Romania Music. It will be aired Wednesday, January the 24th, starting from 17.00, the day of the Union of the Romanian Principalities.

Entry to the concert is free and is based on invitations that can be obtained by calling 021.303.1781 (free of extra charges), between 10.00-14.00 during working days, by filling the form below or by sending an e-mail at muzical@radioromania.ro.

Pianist Raluca Știrbăț is a well-known promoter of Romanian music in general and especially of George Enescu's heritage. She finished her studies at the Music University in Vienna. She has an intense performing activity in the Austrian capital and is the founder and president of the "George Enescu" International Society in Vienna. In 2015, she published the complete collection of George Enescu's piano work at Hänssler Classic. The album became the Classical Music Disc of 2015 in a campaign organized by Radio Romania Music. For the same achievement, Raluca Știrbăț also received the "In memoriam Iosif Sava" award from Radio România Cultural. Raluca Știrbăț is the one who started the restoration and rejuvenation process of George Enescu's house in Mihăileni. The pianist is also active in the field of musicology. She is one of the translators into German of the book Enescu's Masterpieces (Capodopere enesciene) by Pascal Bentoiu. She is also the editor and preface writer for the first Urtext edition of George Enescu's works for piano solo (the first volume came out in 2016 at the Grafoart publishing house).

Cellist Rudolf Leopold is one of the most known Austrian cellists. He was a member of the famous Concentus Musicus ensemble in Vienna, conducted by Nikolaus Harnoncourt, founding member of the famous Wiener Streichsextett, currently a professor at the University of Music in Graz. He is known for his performances of the consecrated cello repertoire, as well as of works less known by the large audience, such as the cello and piano sonatas by George Enescu.