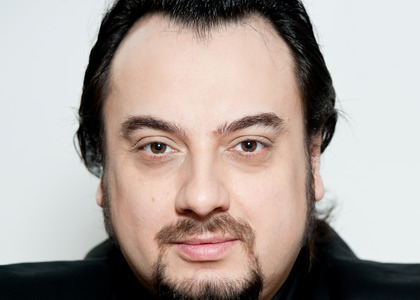 George Petean in 'Rigoletto', opera in concert at the Radio Hall

After his spectacular recent performance at the end of 2017, at the Opera Royal de Wallonie - Liège, Belgium, in Verdi's Rigoletto, George Petean, one of today's most well-known Romanian baritones on the international stage, will sing the same part in an extraordinary concert at the Radio Hall on Friday, 12th of January 2018, at 19.00 together with the National Radio Orchestra and the Academic Radio Choir.

The conductor will be David Crescenzi, an Italian conductor well-known by the Radio Hall's public for his wonderful collaboration with the Radio Orchestras and Choirs. As conductor and art director at the Cairo Opera House, he has collaborated with orchestras of the most important Romanian opera houses, such as the National Opera House in Timi
șoara, Iași and Bucharest. He is currently the art director of the Cluj National Opera House. The Academic Radio Choir will be conducted by Ciprian Țuțu.

The cast of the opera in concert includes soprano Luiza Fatyol in the role of Gilda, tenor Cosmin Ifrim as the Duke of Mantua, mezzosoprano Cristina Damian as Maddalena, bass Petre Burcă as Soprafucile, soprano Mădălina Stan as the Contessa di Ceprano, Giovanna and the Page, bass Marius Boloș as Monterone, tenor Andrei Lazăr as Borsa, Florin Simionca as Marullo, bass-baritone Daniel Pascariu as Count di Ceprano and Cristian Coandă as the Prison Guard.

The Metropolitan Opera House in New York, the Covent Garden Royal Opera House in London, the Teatro Real in Madrid or the Liceu Theatre in Barcelona are some of the prestigious stages on which baritone George Petean has performed in recent years, in shows that have brought him an impressive track record and international recognition.

As lead singer since 2014 at the Deutsche Oper am Rhein Düsseldorf/Duisburg, soprano Luiza Fatyol is the winner of various important classic canto prizes and she was invited to perform in numerous operas on renowned stages in Germany and beyond.

The concert can be heard live on Romania Cultural Radio and Radio Romania Music from all over the country and on live streaming on the Internet at www.radioromaniacultural.ro and www.romania-muzical.ro.

The tickets and the membership cards for the events of the Radio Orchestras and Choirs can be purchased online on www.bilete.ro or at the Radio Hall ticket office. They are also available at offices of the Romanian Post and in the Germanos and Inmedio stores that have Bilete.ro stickers.

For more information about the Radio Orchestras and Choirs, visit www.orchestreradio.ro.