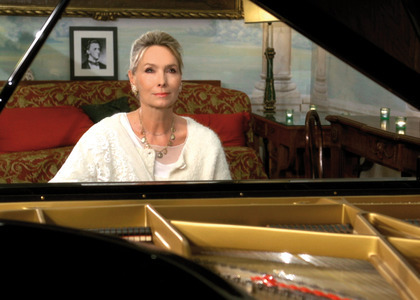 "Even though music is not a purpose in itself, it is I think a privileged path, a scale of light which allows us to access the real values of life, those who make man worthy of God". Elizabeth Sombart

Elizabeth Sombart is not for the first time in Bucharest. In 2016 she performed a charitable concert at Cantacuzino Palace and a year later, appeared with the Royal Camerata, in an extraordinary concert at the Romanian Athenaeum. The French pianist returns to this wonderful concert hall.

For reservations visit the site www.fge.org.ro

The links of the musician Elizabeth Sombart to Romania are deep and strong. Born in Strassbourg, the musician is the great grandson of the great scientist Nicolae Leon, brother after mother with Grigore Antipa. For ten years she studied musical phenomenology with Sergiu Celibidache at the University of Mainz. And the Résonnance Foundation which she created in Switzerland in 1998 has representatives in six countries today including Romania, since 2013. The Mission of the Foundation is to organize classical music concerts in hospitals, elderly homes, specialized medical institutions, prisons. The Foundation also financially supports talented young people without material opportunities.

For her entire activity, in 2006 the pianist Elizabeth Sombart received the French distinction of the National Order of Merit in Knighthood and, in recognition of her outstanding artistic career, in 2008, the Order of Art and Letters also as a knight. The artist's presence in Bucharest is a joy and an honour.