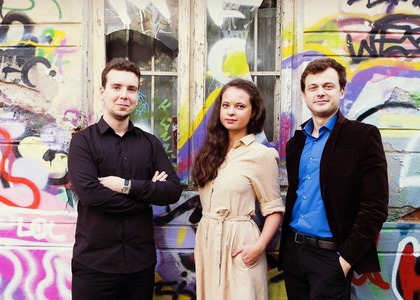 The forth evening of this month's recital should have completed the series of winners of the 'Mihail Jora' Contest - as announced - but an unfortunate cramp made it impossible for cellist Octavian Lup to honor his promise. Accidents happen, we hope he will get better soon and we are certain that we will get another chance to listen to him in a recital within Tuesday Night Season, as Octavian Lup is one of the most talented musicians of the young generation! We would like to thank Ludens Piano Trio for accepting to help their colleague by replacing him on January 30th, and with this opportunity the growing audience which is rediscovering the beauty of the repertory of this genre will be enjoying a bright night with chamber music performed by other three young musicians which earned a name on the concert stages: Rafael Butaru - violin, Ella Bokor - cello, Iulian Ochescu - piano.

An Evening of Chamber Music on Tuesday, January 30th, at 19:00, at the Small Hall of the Romanian Athenaeum - Ludens Piano Trio.

The program of the evening:

Intermezzi and Ballade from "Six Pieces for Piano" op. 118

The tickets can be bought from the ticket office at the Romanian Athenaeum.

The artistic activity of the chamber group includes performances in the season concerts not only in some prestigious institutions such as the Romanian Athenaeum, the 'Banatul' Philharmonic from Timișoara, the Cotroceni National Museum, the National University of Music from Bucharest, but also in the Round Table Bucharest Show - Enjoy TV and Music 100% - Radio Romania International. In October 2015 Ludens Piano Trio won the second prize at Plovdiv International Chamber Music Competition. The members of Ludens Piano Trio have been offered scholarships from SoNoRo Interferențe, and were invited to participate at Workshop Bucharest in 2016 and in 2017, at the Workshop held in Montepulciano - Italy 2016 and at the Workshop in Bad Endorf - Germany 2015, when Alexander Buzlov, Diana Ketler, Janis Maleckis, Alissa Margulis, Răzvan Popovici and Christoph Wyneken have been their maestros.

In the spring of 2017 they had their fisrt national tour - Ludens Piano Trio on Tour.