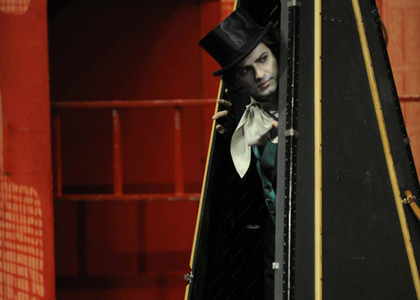 Famous tenor Bogdan Mihai returns on the stage of the Bucharest National Opera House on Thursday, February 1st 2018, starting from 18.30, as Count Almaviva from "The Barber of Seville" by Gioachino Rossini, directed and staged by Matteo Mazzoni.

Italian director Matteo Mazzoni comes to Bucharest with a surprising show, combining the classical Italian lyrical theatre with contemporary tendencies from the world of show-business. Mazzoni's vision as director, stage manager and lighting designer is an interesting parallel between eras and styles, between the environment where the characters originally appeared and the contemporary world.

Bogdan Mihai first stepped into the world of music when he started studying the violin, but due to his vocal qualities he began his studies as a baritone at the Bucharest University of Music, under the careful guidance of Professor Nicolae Constantinescu.

In Italy, under the guidance of soprano Mirella Freni, he discovered his abilities as a tenor and was awarded the "Nicolai Ghiaurov" study grant.

He made his debut as Count Almaviva in the opera "The Barber of Seville - Il Barbiere di Siviglia" by Rossini in December of 2007 on the stage of the Bucharest National Opera House, which included the final aria for the tenor, "Cessa di più resistere". Thus, Bogdan Mihai established an absolute premiere in Romania.

In October 2011 he was invited by the great soprano Angela Gheorghiu to sing in two extraordinary belcanto concerts on the stage of the prestigious Suntory Hall in Tokyo, accompanied by the Japan Philharmonic Orchestra, with Ion Marin conducting.

He has released three DVDs internationally: Aureliano in Palmira at the Martina Franca Festival (2011) with the Italian record label Bongiovanni, Adelaide di Borgognade at the Rossini Opera Festival in Pesaro (2011) at the Arthaus Musik label. The opera were broadcast live in Europe, the United States and Asia. He has recently released the DVD for the opera Mosè by Rossini, recorded at the Dome in Milan at the Expo Milan 2016 international fair and the full opera Il viaggio a Reims on CD at the Naxos record label.

Mihai Bogdan was part of the cast that sung at the inauguration of the first opera theatre in the Arabian Emirates, the Dubai Opera House, with him playing the main part in the opera Il Barbiere di Siviglia by Rossini, a part which he has sung 230 times on the world's greatest stages since his debut.

His debut in the part of Elvino from La Sonnambula by Bellini took place on the stage of the prestigious Teatro Verdi in Trieste and it was a great success.

A new important debut will take place on the stage of the San Carlo Theatre in Naples, followed by a tour at some of the most important lyrical theatres in Beijing, Shanghai and Hong Kong. The young tenor's agenda is full until 2019.

Tickets can be purchased from the Bucharest National Opera House ticket office or online, at http://tickets.operanb.ro/.