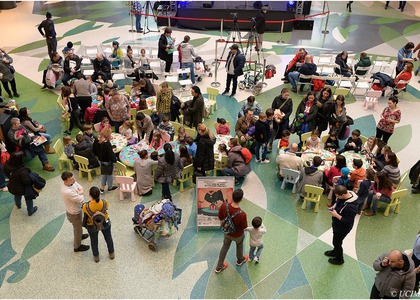 Mircea Tiberian, one of the most famous names in Romanian jazz and a teacher for many generations of musicians, will perform a concert Sunday, February 18th, starting from 18.00, on the Main Square stage of the ParkLake commercial centre.

The concert is part of the Rainbow Elephant project which includes, from 16.00, an invitation behind the scenes of shadow play - a creative workshop inspired by jazz music and meant for children between 4 and 10. Entry will be free. You can find more on the schedule of the events in what follows.

With a musical career spanning over 40 years, Mircea Tiberian is a pianist and composer, but also a professor at the Bucharest National University of Music where he founded - and still coordinates - the Jazz Department. He is vice-president of the Romanian Jazz Association and is also the author of a "Jazz Curriculum" for music high-schools in Romania. Mircea Tiberian began studying the piano when he was 4, and at 14 he won the special jury's prize at a piano competition. His meeting with Johnny Răducanuwas a moment that marked his impressive path dedicated to jazz.

Over 200 children took part at the first two events of the Rainbow Elephant, both at the workshops where they crafted small musical instruments and decorations, and at the concerts performed by Adrian Nour and Irina Sârbu. Children had the opportunity to use the instruments they themselves crafted as they accompanied the other musicians.

The aim of the project initiated by the Romanian Musicians' Union for Interpretative Creation and co-financed by the Administration for the National Cultural Fund is to bring jazz music closer to the youngest members of the audience (and not only), thus underlining its ability to create a world full of color, contrary to the common belief that jazz is an inaccessible genre.

During the concert on Sunday the 18th, the audience will experience something truly special, since Mircea Tiberan will take up the challenge to perform, in premiere, a song for children… jazz style. At the first event, Adrian Nour performed a song loved by many generations, "One Elephant on a Spider's Web", while Irina Sârbu performed several songs, such as "If You're Happy And You Know It, Clap Your Hands" (Romanian: "Dacă vesel se trăiește, bate așa").

Starting from February 4th, every Sunday, parents and children alike are invited on a novel journey in the world of creative workshops complemented by the magic of jazz.

The "Rainbow Elephant" is a true creative safari for the entire family, where you can spend your free time this season until the coming of spring in a way that is as pleasant as possible. Between February 4th and April 1st, the Romanian Musicians' Union for Interpretative Creation and ParkLake have organized a series of interactive workshops that are full of surprises, followed by jazz concerts performed by the most beloved and appreciated bands of the moment.

In the Main Square area of the ParkLake commercial centre, the "Rainbow Elephant" will host workshops each Sunday, starting from 16.00. These activities are meant to develop their artistic and practical abilities, as well as familiarize them with a jazz music that is full of creative tonalities and will be the gluing agent of all the activities.

The jazz concerts, performed by some of the trendiest bands of the moment, will begin at 18:00 every day. Adrian Nour, Viorica Pintilie, Marta Popivici, Irina Sârbu, Mircea Tiberian, Blue Noise, Bourbon Jazz Unit, Teodora Spînu, Luisa Zan - these are the artists who will create worlds of sound meant to bring children closer to the genre.

There are studies and evidence showing that music does indeed improve one's learning capacity and, through this project, the organizers' aim was to create a friendly environment for development and education.

It all started from the fact that the "elephant", as jazz is countless times labeled, actually hides a world full of sound and color that can only be experienced by those who have the patience to learn and listen.

That is why the artist who were invited to perform every Sunday are musicians who have proven time and again that they know and can give jazz a voice on a professional level while keeping its diverse color (tone) spectrum, and they can offer the audience the music from various time periods while combining a number of musical styles through sheer joy of being.

Just like the concerts, the workshops will be held by professionals in their field, dedicated individuals with certified teaching skills and experience in coordinating such activities. The workshops will be organized in partnership with members of the Romanian National Scout Organization, the Local "Steaua Polară" Centre.

With over 20 years of experience in developing cultural projects, the Romanian Musicians' Union for Interpretative Creation is once again in sync with the European tendencies of facilitating access to culture through music in partnership with public and private institutions. The "Rainbow Elephant" - Jazz and Creative Workshop Sessions at ParkLake is a cultural project co-financed by the Administration for the National Cultural Fund.