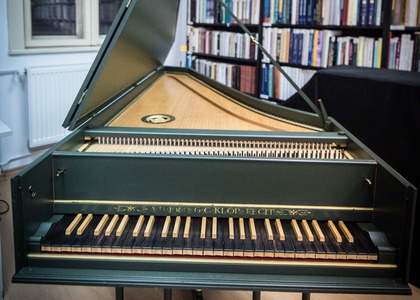 We are delighted to invite you to a special concert on March 21, starting at 19, in the hall of the "Csíki Mozi" Cinema

The Early Music Festival in Miercurea Ciuc joins the series of events organized on the European Day of Early Music.

As of 2013, the European Early Music Network (REMA - Réseau openéen de Musique Ancienne) has marked March 21 - the birthday of composer Johann Sebastian Bach and the beginning of the astronomical spring - as the European Day of Early Music. Concerts, conferences, and various other programs are held simultaneously all over Europe, as the members of REMA have the objective of promoting Europe's historic musical heritage.

During the concert in Miercurea Ciuc, the audience will have the chance of hearing for the first time the harpsichord donated to the Early Music Festival by Mrs. Regina Härdi from Switzerland and played by harpsichord professor Mária Fülöp.

Baroq'eMotion brings the artistic refinement of the 17th-18th century man into the modern-day world and superimposes it on the "technical revolution" of the 21st century. The program is a strange mix between conformism and non-conformism, between the elegant costumes and the sophisticated perfumes from hundreds of years ago that are replaced nowadays by simple and comfortable clothes worn by hurried people who "communicate" in just a matter of seconds over distances of hundreds and hundreds of miles.

Baroq'eMotion is the musical bet that preserves the sumptuousness and subtleness of the Baroque period while also adding the contemporary minimalistic style to it, garnished with technology and modern-day media.

As of 2009, she is the president of the Ars Saltandi Association in Cluj-Napoca.

Raluca Enea graduated from the National University of Music Bucharest, Department of Instrumental Music Pedagogy - piano and Music interpretation - harpsichord, where she studied under professor Ogneanca Lefterescu. In 2005, she continued her harpsichord studies in Germany under the guidance of professors Harald Hoeren, Glen Wilson and Ketil Haugsand.

She has performed in concerts in Romania, Germany, Norway, and Hungary. She is a lyrical artist is the "George Enescu" Philharmonic in Bucharest, associate professor and PhD student at the National University of Music Bucharest and the artistic director of the Early Music Festival in Bucharest. She coordinates educational projects in the field of early music organized by the Antiqva Cultural Association in Romania.

Aysel-Luiza Pușcașu obtained her Bachelor's and Master's degree from the Department of Instrumental Performance at the National University of Music Bucharest where she studied under professor Raluca Enea.

She frequently performs in concerts in Bucharest and in other parts of Romania.

Laurențiu Calomfirescu was born in 1968. He graduated from the Faculty of Cybernetics in Bucharest and from the University of Arts in Târgu Mureș where he studied directing. He has staged shows played at the Nottara Theatre and at the Comedy Theatre in Bucharest, as well as in Târgoviște, Arad, Sf. Gheorghe and Sicily -Italy.

He has made many short films as well as documentaries. He is currently working on a book called "99 Short Film Screenplays".

He teaches directing at the Artistic Centre for Documentaries and Short Films.

He has made numerous video and audio spots, as well as official videos for the rock band Iris. He also made several story audiobooks for numerous publishing houses.

Ticket price is 15 lei; 10 lei for pensioners, pupils and students.

Tickets can be purchased online at www.bilete.ro or at the concert venue, one hour before the event.