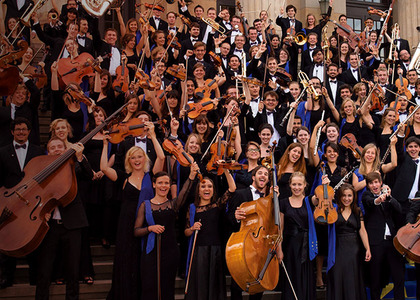 EUYO – The European Union Youth Orchestra, an extraordinary performance organized by the Romanian Cultural Institute at the Romanian Athenaeum

"The EUYO offers a priceless experience for the future generation of grand musicians. It is the cornerstone of the beginning of a successful career. It has always been, and it will forever be a unique orchestra." (Vladimir Ashkenazy)

The European Union Youth Orchestra
, conducted by Vasily Petrenko, will perform on Sunday, the 15th of April 2018, at 7 PM, at the Romanian Athenaeum, as part of the Capital Sounds anniversary tour, that will take place in all 28 member states of the European Union, celebrating 40 years since the orchestra was formed. The event is organized by the Romanian Cultural Institute.

The repertoire contains Sergei Rachmaninoff's Piano concerto no. 2 in C minor, op. 18, having Alexandra Dariescu as a soloist, and Nikolai Rimsky-Korsakov's symphonic suite entitled Scheherazade. To open the concert, AdMusicam Ensemble will be performing for the first time a piece entitled Rustic Quartet, signed by Victor Savca. The ensemble is comprised of violinist Ioana Tudor, viola player Alex Spînu, cellist Victor Sandu, all of them participants in the AdMusicam program, organized by the Romanian Cultural Institute, and last, but not least, Victor Savca on double bass, a composer and former member of the EUYO.

The EUYO is a European music project that reunites the most talented musicians from all EU member states, under the baton of international acclaimed conductors, in an orchestra that transcends the social, cultural, political and economic barriers. Since 2010, the Romanian Cultural Institute has been supporting Romanian musicians who take part in the EUYO.

The European Union Youth Orchestra will perform on the 15th of April 2018 in the Grand Hall of the Romanian Athenaeum at 7 PM. Radio România Muzical and Radio România Cultural will broadcast live, having Anca Ioana Andriescu as its commentator.

Vasily Petrenko was born in 1976 and he began his musical studies at the Saint Petersburg Capella Boys music school, the oldest music school in Russia. He then studied at the Saint Petersburg Conservatory and he took part in a series of masterclasses along with Ilya Musin, Mariss Jansons and Yuri Temirkanov. After new-found success that followed several international competitions, mentioning the 4th edition of the Prokofiev Conducting Competition in Saint Petersburg (2003), first prize for the Shostakovich Conducting and Choral Competition in Saint Petersburg (1997), and first prize for the 6th edition of the International Conducting Competition in Cadaques, Spain, Petrenko was named the main conductor for the State Academic Symphonic Orchestra in Saint Petersburg between 2004 and 2007. In September 2017, Vasily Petrenko won the "Artist of the Year" award during the prestigious Gramophone Awards, a decade after receiving the award for "Young Artist of the Year" in October 2007. In 2010, he won the "Artist of the Year" award at Classical Brit Awards. During this period, he made his debut at the Berlin Philharmonic Orchestra, he conducted the Royal Liverpool Orchestra and the Oslo Philharmonic Orchestra in several concerts in Europe and Asia, and he collaborated with the Accademia Nazionale di Santa Cecilia, with the Netherlands Radio Philharmonic, with the Orchestre Philharmonique de Radio in France, with the London Philharmonic, the Israeli Philharmonic, with Vienna Symphony Orchestra and Montreal Symphony Orchestra. In 2015's edition of the "George Enescu" Festival, Petrenko conducted the Royal Liverpool Philharmonic Orchestra, along with the "George Enescu" Philharmonic Choir, violinist Alexandru Tomescu and violinist Valery Sokolov, interpreting great works by Sergei Rachmaninoff, George Enescu, Ottorino Respighi or Alexander Glazunov.

Alexandra Dariescu leaves the audience speechless through the innate musicality of her interpretation and her captivating stage presence. From the recent performances at Carnegie Hall in New York, Concergebouw in Amsterdam, to the Royal Albert Hall in London, the musical season of 2017-2018 was meaningful for Alexandra Dariescu, having her debut at the prestigious Musikverein, that celebrated 100 years from the birth of Dinu Lipatti with two concerts (Lipatti and Grieg), along with the Transylvania Philharmonic, conducted by Gabriel Bebeşelea, but also premiering in the United States with the Utah Symphony, and in Canada with Kitchener - Waterloo Symphony and the Orchestre Philharmonique de Québec. The high point of this season will be the premiere of her own production, The Nutcracker and I, by Alexandra Dariescu - a multimedia show, arranged for piano, with digital dances and animations. It will take place at Milton Court in Barbican, followed by other performances in the Stavanger International Festival for Chamber Music, along with other numerous tours in China. In 2018, Alexandra Dariescu joins the Young Leaders European program (EYL40), organized under the sponsorship of Jean-Claude Juncker, the president of the European Committee. EYL40 is an innovative program with the purpose of promoting a European identity by gathering the most promising talents in Europe.

The European Union Youth Orchestra (EUYO) is one of the most important orchestras worldwide. The Guardian described it as being "captivating, refreshingly good, full of energy, with a precise focus and a charming boldness". Jean-Claude Juncker, the president of the European Committee, named it "the best possible ambassador for the European Union". Since 1976, when the orchestra was founded, it has been offering an exceptional connection between music universities and the professional world for entire generations of the best musicians in Europe. The orchestra collaborated with many of the biggest musicians in the world, such as Daniel Barenboim, Leonard Bernstein, Herbert von Karajan, Mstislav Rostropovich, and with some of the greatest musical directors and conductors - Claudio Abbado, the founder musical director, Vladimir Ashkenazy, former musical director, Bernard Haitink, the current award winning conductor, and Vasily Petrenko, who is the main conductor. With a well-known name in the entire world, the EUYO has performed in almost all the great concert halls and took part in the most important festivals in the entire world - the BBC Proms, Royal Albert Hall in London, Carnegie Hall in New York or Musikverein in Vienna, just to name a few. From Amsterdam to Abu Dhabi, from Moscow to Mumbai, from Seoul to São Paulo, the orchestra has performed in hundreds of concert halls throughout four continents.

3.000 graduates of the EUYO have successfully passed through the strict audition process of the orchestra, taking place in all the EU member states (currently 28), and many of them are now conductors, soloists, professors, and instrumentalists that perform with the greatest orchestras in Europe and in the world. Yearly auditions are organized in every country for the 130 seats in the EUYO. Even the current members of the orchestra need to present to the auditions to keep their seat. Furthermore, the EUYO has almost 200 season musicians, who have the chance of performing with the orchestra during the year. The EUYO holds two annual tours, in spring and in summer, that include performances in some of the most important concert halls and festivals in Europe. Each tour is preceded by a residency, intense studying and rehearsal period.

In 2018, the spring tour program, conducted by Vasily Petrenko, the main conductor for the EUYO, includes Rimski-Korsakov's Scheherezade symphonic suite as well as Brahms' Symphony no. 2. Also, the orchestra members had the occasion of taking part in residencies and concerts, both in Europe and other continents. The concert on the 15th of April at the Athenaeum marks the end of the EUYO's spring tour.

The summer tour will include residencies in Grafenegg, Austria and Bolzano, Italy, and concerts in the most important festivals in Europe and in the greatest concert halls in Austria, Germany, Italy, Holland, Poland, and Great Britain. The orchestra will be conducted by Manfred Honeck and Gianandrea Noseda, having a repertoire that includes Richard Strauss' Der Rosenkavalier suite, arias from operas, Tchaikovsky's Symphony no. 5 and Respighi's Fountains of Rome and Pines of Rome.

The EUYO is a resident orchestra for its main partner in Grafenegg, Austria and partner of the Grafenegg Campus. Also, it recently secured an important partnership and has established a new legal headquarters with the Italian Ministry of Culture, the Municipality of Ferrara and RAI. In 2018, to celebrate the European Year of Cultural Heritage, the EUYO will perform in 13 countries in Europe, South America, the Middle East and Asia, and will have its residencies in Bolzano, Ferrara, Grafenegg, Dubai and Shanghai. Founded by Joy and Lionel Bryer in 1976, the EUYO has been the Cultural Ambassador of the European Union for 40 years. The honorary protectors of the EUYO include the Head of Government of every EU member state, the president of the European Committee and the president of the European Parliament. In the past few years, the EUYO has enriched its already enviable tradition with a series of innovative study and performance programs with its project entitled "Towards 2020", thus empowering its members with the required skills to face the challenges of the society and the audience of the 21st century.