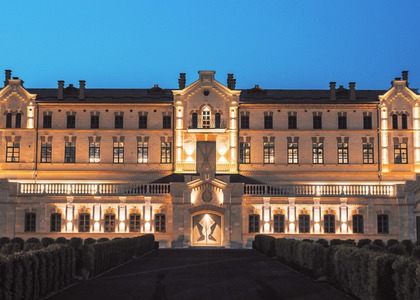 “Rhapsody in Stone” SoNoRo Manor in the Republic of Moldavia

The SoNoRo Manor concert series will reach the Mimi Castle in the Republic of Moldova tomorrow, May 31st. The Castle is an important architectural monument and viticultural center founded by Constantin Mimi, the last governor of Bessarabia until the Union in 1918, and then director of the National Bank of Romania.

As a graduate of the Montpellier Superior School of Agriculture, Constantin Mimi was an illustrious wine maker of the 20th century and transformed the Castle in the center of an intensive modernization process of the entire national viticultural sector. During the Soviet domination, the Castle was transformed into one of the greatest wine factories in the USSR. The old construction was hidden behind a façade and the castle was forgotten. Only in 2010, when doing some routine tasks, did the workers discover what was behind the placated façade. Thus began the most ample restoration process in the recent history of the Republic of Moldova. Today, Castle Mimi is featured among the top 15 architectural masterpieces in the world.

The first part of the SoNoRo Manor "Rhapsody in Stone" concert series will end next week, with two concerts: on June 4, at the Palace of Culture in Blaj, and on June 5, at the Miko Castle in Miercurea Ciuc.

The Palace of Culture in Blaj has won the European Union Prize for Cultural Heritage / the 2017 Europa Nostra Prizes, the highest European heritage award. Initially cut from the list of protected monuments due to the advanced state of degradation it had been in after it was 40% destroyed by a fire in 1995, the building was supported by local authorities and restored. The project led by architect Vlad Sebastian Rusu managed to bring together the history of the building, the vestiges of the fire, while also creating a contemporary space, destined to house a diversity of artistic forms.

"Without necessarily planning it, with this edition of the SoNoRo Mansion "Rhapsody in Stone" that took place during the Year of the 100th Anniversary of the Great Union we have managed to touch some important reference points for our history on the map of emblematic Romanian buildings, new and old. I'm happy we live in a time of rebirth and plenitude, perfectly illustrated by buildings that have managed to reinterpret themselves while keeping the tradition, but also looking towards the future, such as the Palace of Culture in Blaj or the Mimi Castle in the Republic of Moldova. The 100th Year Anniversary of the Great Union finds us, I think, in a time where we celebrate the absence of borders between us, the beauty everywhere and the desire to share it with others in an atmosphere of joy", said Răzvan Popovici, the initiator of SoNoRo Manor and the director of the SoNoRo Chamber Music Festival.

SoNoRo Manor is a project started by the Sonoro Association with the help of main partner BRD - Groupe Société Générale, the Order of the Architects of Romania and the National Heritage Institute, with the aim of intermediating favorable contexts to save important monuments in Romanian heritage. The SoNoRo Manor concert in the Republic of Moldova is possible with the help of Mobias Banca Groupe Société Générale.

The last concerts of the 6th edition of the SoNoRo Manor will take place in September, with the following schedule:

After every concert, the audience is invited to a cocktail evening offered by Illy and the Avincis winery.