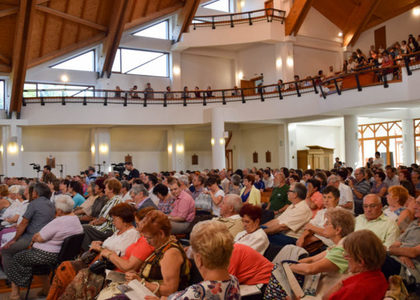 The Harghita County Council, the Harghita County Cultural Center and the Miercurea Ciuc Municipality will be organizing, between July 8 and 15, 2018, one of the most remarkable cultural events in the region, the Miercurea Ciuc Early Music Festival, which was initiated in 1980. Starting from 2008, the Festival is a member of the European Early Music Network (REMA), and in 2015 entered the category of the big continental festivals, through the affiliation to the European Festival Association, which is under the aegis of the European Union, which awarded the Festival the honoring label “Europe for Festivals, Festivals for Europe” (EFFE), a status which was renewed for the period 2017-2018.

The artistic director of the Festival is flautist
dr. IGNÁC CSABA FILIP, a professor at the Faculty of Music at the Transilvania University in Brașov. He will be accompanied by his colleagues from the enthusiastic and experienced team of the Harghita County Cultural Center, as well as by a great number of collaborators and volunteers.

The previous editions of the Festival lasted for four days, but this year the program will last for eight days. If, during previous editions, the themes of the Festival were German early music or French baroque music, this year the central theme is the Iberian early music, as Spain is the cradle of some unique musical works, characterized by a special rhythm, an original mix of elements from several cultures and, last but not least, a passion that has become proverbial. So it is not surprising at all that the motto of this edition is “Música apasionada” / „Passionate music”.

The program of the Festival will feature, apart from numerous lectures and concerts, events such as book presentations, film screenings, Spanish wine tasting, instrument presentations, an exhibition and events organized with the occasion of the anniversary year dedicated to king Matthias Corvinus (575 years since his birth and 560 years since his taking the throne). Apart from this, we will mark the 10th anniversary of the Festival’s Baroque Orchestra, who will be interpreting the famous oratorio St. Matthew Passion by J.S. Bach. A decade has passed, a generation has matured, so that in the orchestra we will also find former students of the Summer University for Early Music from Miercurea Ciuc. The oratorio – the Festival’s own production – can also be listened to by the music lovers in Bucharest and Brașov. The concerts of the Festival’s Baroque Orchestra are performed in collaboration with Musica Barcensis.

This year we have guests from Hungary, Germany, France, Italy, Spain, Sweden and the Netherlands, but there will also be young, talented musicians and famous early music bands from our country.

The main venue of the Festival will be the Mikó Fortress. Other locations include various churches in Miercurea Ciuc, but events will also be organized in the Miercurea Ciuc Cinema, in the rooms of the „Márton Áron” National High School, in the club and the hall of the County Cultural Center, as well as in public spaces. Concerts will also be performed in Siculeni, Brașov and Bucharest.

Like in previous years, the Association Cultura Nostra and the Department for Interethnic Relations offers grants for 10 young people who will be able to enroll for free at the Summer University for Early Music. Thanks to the generosity of the Il Cigno Ensemble (Italy), two more students will be able to join the courses with scholarships.

The novelty this year is that some concerts at the Festival have an entrance fee. The price of the tickets varies between 5 and 20 lei, but some events are free.

Tickets can be purchased on the spot or from the cinema.