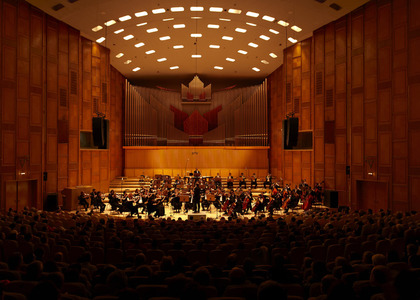 The RadiRo festival will start with Rhapsody No. 1 by Enescu!

The countdown has started: only 6 days until the International Festival of Radio Orchestras - RadiRo (18-25 November 2018)! On Sunday, November 18th, at 19:00 at Sala Radio, the National Radio Orchestra, celebrating its 90th birthday, will open the sixth edition of the unique festival dedicated to radio orchestras, with Enescu's Rhapsody No. 1 and pieces by Ravel and Debussy!

The opening of the festival will start with the Romanian Radio National Orchestra led by the French conductor, Jean-Claude Casadesus, who founded the Orchestre National de Lille (France) in 1976. He recorded more than 30 different albums and held concerts in 32 countries with the Orchestre National de Lille. The program will start with the famous Rhapsody No. 1 by George Enescu, which will be followed by works by French composers such as Maurice Ravel (the Piano Conerto en Sol Majeur, Pavane pour une infante défunte and Daphnis et Chloé Suite) and Claude Debussy with Prélude à l'après-midi d'un faune. The extraordinary event will also feature a special guest: the Spanish pianist Javier Perianes, a successful pianist who performed on the world's biggest stages. (Carnegie Hall in New York, Barbican Hall in London, the Great Hall of the Moscow Conservatory, Suntary Hall in Tokyo, Teatro Colon in Buenos Aires). The concert will continue with the Academic Radio Choir (conductor: Ciprian Țițu).

On Wednesday, the 21st of November (19:00 o'clock)The National Radio Orchestra will present the second concert, part of the RadiRo Festival, this time under the baton of the French conductor Frédéric Chaslin, the musical director of the Jerusalem Symphony Orchestra. He was Daniel Barenboim's assistant in Paris and Beirut, and in 1991 he became assistant to Pierre Boulez. He also collaborated with him on Ensamble Intercontemporain. Winner of the prestigious German Echo Klassik Prize for his recordings of Bach concertos, French pianist David Fray will perform the Piano Concerto in A minor, Op. 54 by Schumann at Sala Radio. The night's program brings two more famous creations: the Romeo & Juliet Overture-Fantasy by Tchaikovsky and The Symphonic Suite by Rimsky-Korsakov named Scheherazade.

All the concerts will be transmitted live by Radio Romania and members of the Radio European Union. Romanian Television will also record and broadcast the festival.