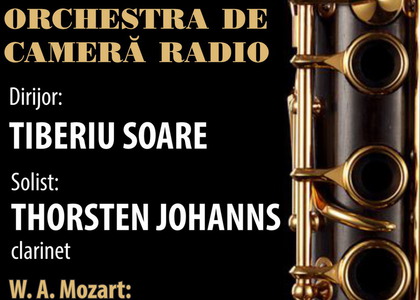 The conductor Tiberiu Soare ia coming back to Sala Radio for a Mozart/Beethoven event!

After several years of absence, the famous Romanian conductor TIBERIU SOARE is coming back on the stage of Sala Radio, for a beautiful MOZART/BEETHOVEN concert, presented by The Radio Chamber Orchestra, on Wednesday, 6th of March (19:00).

The special guest of the night is the valued German musician THORSTEN JOHANNS, the first German clarinettist to be repeatedly invited to perform as principal clarinet with the New York Philharmonic Orchestra. Over the course of his career, he has also worked with many prestigious orchestras from his home country, like the Berlin Philharmonic, the Munich Philharmonic, and radio orchestras from all over Germany. Clarinet teacher at the "Franz Liszt" conservatoire in Weimar, Thorsten Johanns is a member of the Raro ensemble, with which he performed in Europe, USA and Japan.

The evening at Sala Radio will begin with two creations by the famous Amadeus: the Don Giovani Overture - a Mozart creation inspired by the exploits of the seductive and adventurous legendary character Don Juan - and the Concerto for Clarinet and Orchestra in A Major. In the second part of the concert, the audience will listen to Symphony No. 4 by Beethoven.

The concert will be broadcast live on all frequencies of Radio România Cultural and Radio România Muzical, and on www.radioromaniacultural.ro and www.romania-muzical.ro.