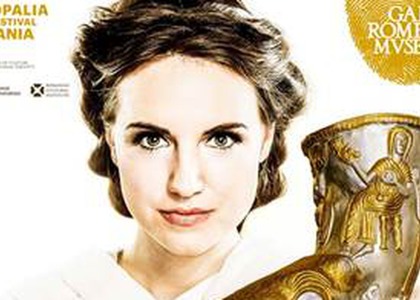 The ancient Romanian treasury, presented at the exhibition Dacia Felix, at EUROPALIA festival

An exhibition of great importance dedicated to the historical heritage of Romania, which brings together hundreds of artifacts and sets of ancient pieces discovered on the territory of our country, are presented as a space of interference of the Scythian, Greek, Celtic, Dacian, Getic and Roman civilizations, will be opened in Belgium , between October 19, 2019 - April 26, 2020, at the Gallo-Roman Museum in Tongeren, within the EUROPALIA festival.

The exhibition Dacia Felix is curated by the National History Museum of Romania (MNIR), the Romanian Cultural Institute (ICR) and the Gallo-Roman Museum in Tongeren, with the support of the Ministry of Culture and National Identity and the Ministry of Foreign Affairs,the exhibition "Dacia Felix. The Glorious Past of Romania" / "Dacia Felix. Trecutul glorios al României " is intended to be an exercise in understanding a current civilization, the Romanian one, from the perspective of reporting to a common European past.Selected and located after a concept of the Gallo-Roman Museum in Tongeren, the exhibits come from MNIR- National History Museum of Romania and 18 other museums in the country, which contributed to the realization of this comprehensive project.

Over the last six months, visitors of the Gallo-Roman Museum in Tongeren - which was awarded in 2011 with the prestigious European Museum of the Year Award (EMYA) - will have the opportunity to experience a wide and unique journey through the ancient cultures documented within the current Romanian space, seen as a place of convergence of many major civilizations for the cultural heritage of Europe and humanity. Among the most spectacular pieces of Romanian cultural heritage exhibited in Belgium are: The Silver Rhyton discovered in Poroina Mare, Mehedinţi county, dating from the IV-III centuries BC, an exceptional piece of Thracian-gold jewelry, a cult object used in religious ceremonies, attesting the identity of material and spiritual culture between the Thracian filiation communities on both sides of the Danube; The Inscription dedicated to Caracalla, Ilişua "Vicinal" [Arcobara / Arcobadara], Uriu commune, Bistriţa-Năsăud county, limestone plaque dedicated to the Roman emperor Caracalla, dating from 213 P. Chr., is remarkable because it refers to a military unit which was stationed in Dacia, but had the recruiting area in the region where the Belgian city of Tongeren is currently located; The Helmet from Ciumești, Satu Mare county, made of bronze, dating from the 5th century BC, is an artifact of exceptional value attesting to an important Celtic presence in the intracarpatic territory; Foot cups and other objects from the Treasury from Sâncrăieni, Harghita county, dating from the 1st century BC,are an expression of the excellence of the Dacian craftsmen, proof of the level of excellence achieved by this civilization in the artistic processing of precious metals; aTanagra type statue from the Callatis Fortress- Mangalia, Constanța county, from burnt clay, dating from the IV-III centuries BC, painted in blue, red and white, part of a funeral monument, which shows the permanent contacts with the central areas of manifestation of the Greek-Hellenistic civilization; The Zoomorphic Appliqué discovered in Stânceşti, Botoşani county, made of gold leaf, dating from the 5th century BC, representative for the Scythian civilization, is a piece that demonstrates the interweaving of Scythian-Iranian art with local realities; The Gothic Cap from Coțofenești, Poiana Vărbilău commune, Prahova county, dating from the first half of the 4th century BC, a piece of solid gold, weighing 821,35 grams, is almost intact.

"Dacia Felix" is more than a geographical space defined by a chronological moment related to the transformation of the Dacian kingdom into the Roman province; it is the story of the past, brought to the present and especially projected into the the future, it is a journey into the intimacy of making history, about civilizations, about Greeks, Romans, Dacians, Getae, Celts and Scythae, but especially about people who are founders and living in the generous space of today's"Dacia Felix", not by chance, that is Romania.

During the preparatory phase of the exhibition "Dacia. The Glorious Past of Romania" a documentary-support was produced by an independent Belgian-Romanian co-production. The drone shootings and video camera took place between 17-30 June 2019 at the Colonia Ulpia Traiana Augusta Dacica Sarmizegetusa (Hunedoara County), Sarmizegetusa Regia (Hunedoara County), Zimnicea, the fortress and its surroundings (Teleorman County), and the Histria Fortress (Constanța County), Raven's Nest, Sub Piatra village, Sălciua commune (Alba County) and in the Danube Delta - Letea Forest and its surroundings (Tulcea County). The film can be viewed within the exhibition and soon on the site of the Galo-Roman Museum and other media platforms.