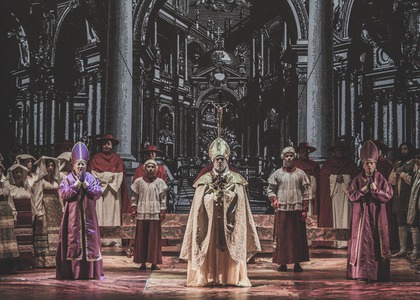 Lăcrimioara Cristescu and Mikheil Sheshaberidze are invited to perform in the „Tosca” show, in Puccini’s strongest work at the Romanian National Opera

The audience will be able to see how the amazing soprano Lăcrimioara Cristescu will interpretate the role of Florina Tosca. The people present will also have the chance to see the tenor Mikheil Sheshaberidze giving life to Mario Cavaradossi.

The Bucharest National Opera presents on Sunday, October 20, 2019, starting at 18:30 o'clock the show "Tosca" by Giacomo Puccini. The directing, the decoration, the costumes and the light design are under the signature of Mario De Carlo. Master Tiberiu Soare will be at the director's office. The choir of the National Opera in Bucharest will be prepared by Daniel Jinga, and the children's choir by Smaranda Morgovan. Assistants directed by Claudia Machedon and Paula Gherghe.

For the opening night which will take place atthe Bucharest National Opera, the director Mario De Carlo has prepared an ambitious staging, as he himself states: "TOSCA is Puccini's most tragic opera. His theatricality is found entirely on stage, in situations and in Music: A sensitive director has an easy task with TOSCA: he must close his eyes and ... let himself be carried in. Puccini is not a composer associated with verism, but it is clear that in "Tosca" the author insists on realistic details and that he is in a search for scenic effects in strong nuances. The exacerbation of the aspects of cruelty and morbidity constitutes un trait d'union with representative codes of a theater that departs from Seneca's tricks and, along the execution in the stage of the Elisabetan Theater, reaches the rivers of blood specific to the Grand Guignol theater. All three protagonists die, and suffer a violent death. We are light years away from the languorous deaths of heroes and heroines from melodramas. Here is the destruction that overcomes feelings, impulses and passions. The plea is the real protagonist of the work. The archetypal supplication which has its own reason and imposes itself as the only decisive element, through ritual, exhibition and spectacularization. I found inspiration in what Michael Foucalt called - the splendor of torment."

The impressive opera, which was inspired by a play of the French playwright Victorien Sardou, "Tosca" is, without a doubt, a powerful drama, like the life from which any boring scene was eliminated; a drama of a great love - the love between a diva of opera music, Floria Tosca, and a talented young painter, Cavaradossi -, with historical realities such as the reign of Maria Carolina, the daughter of Maria Terezia and the sister of Maria Antoaneta, as well as the defeat in the end of Austria over Napoleon in the battle of Marengo, with actions laden with sadism, with extremely strong feelings such as jealousy, hatred, fear.

This complex work, the force of which Puccini had already intuited before composing it - "an opera I need", he said at the time - does not cease to reverberate his spell even after more than a century since the world premiere. . Which means that viewers of any generation need, as Puccini had, this work. "Tosca" remains therefore a mirror in which we all look, from time to time, the peaks and the descents of the soul.

The tickets can be purchased on http://tickets.operanb.ro/ and at the ticket office of the Bucharest National Opera (schedule Monday - Sunday between 10am - 1pm and 2pm - 7pm).